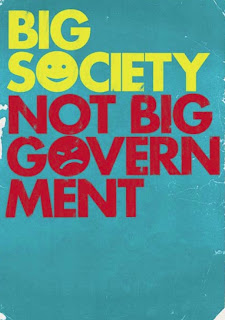 It's funny, this 'Big Society 'idea.

I really want to like it. Local people coming together for the common good, determining their own actions, making where they live better/safer/more caring. And it seems entirely consistent with our principles of taking power and authority away from the centre and into the hands of the people it directly affects at a local level. What's not to like?

And what's more people across the political divide seem to agree. In the past week I've heard people as diverse as Clare Short, Camilla Batmangelidh and Danny Kruger all extol the principles (but most certainly not the execution) of the idea, and now Chris Rennard is to chair the Acevo 'Big Society' Commission. So across the political divide there is a feeling that this could all generally a good thing.

So what's the problem?

Well, last night's Newsnight (see from about 14.00 in) got some way to the nub of the problem - no one can really explain what exactly the idea is, how to synthesise it, how to explain it, how to promote it - and until you get to grips with that, you've no chance of engaging, exciting and enthusing the public not only to support the idea but to actively get stuck in.

And more than that: while one side of government is extolling the virtues of The Big Society, the cuts at local government make it impossible for local people to do the very thing the government is telling them they should be doing. Which is why people like Dame Elisabeth Hoodless and Frank Field are questioning the wisdom of the whole venture. (And for a very good look at what the cuts can mean in reality, see this brilliant taking apart of Hammersmith and Fulham council by Johann Hari, from around election time last year).

Explain it properly. Fund it. And the Big Society will have a chance.Leave it hanging, and take the money away, and it has no chance