Nick Clegg bashing by the Press is getting ludicrous now.

I blogged the other day about the loss of jobs in the hospitals at St. Georges, Tooting and Kingston, wondering if this was the Tory's 'tuition fees' moment?

After all - David Cameron personally pledged not to do this.

And the lead on all the NHS reforms is a Tory, Andrew Lansley.

So this is going to be hung around their necks, isn't it...isn't it? 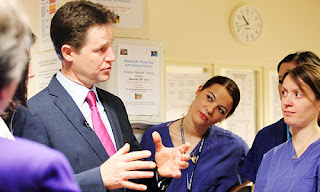 Underneath they ran the words 'Nick Clegg, the deputy prime minister, talks to nurses in the maternity unit at Kingston Hospital. Last week, the hospital cut 500 jobs'.

Now, I have railed against the perils of 'too much' collective rsponsibility before. But now it seems collective responsibility - when its Nick Clegg - is being thrust upon us.

And today - it gets worse: Nick made a throwaway joke while away on a break about forgetting he was in charge. And what happens? Metro goes to town on it with this

Nick Clegg has admitted ‘forgetting’ he was running the country while David Cameron visited the Middle East this week."

As if that is any way credible. The only real joke here is the story.

However it does go to underline that the press is basically just now out to get Nick. In recent weeks he's put forward the Freedom Bill, led legislation on mental health, won the battle to get the AV referendum bill through...but Metro refers to the ridiculous story that he is 'putting his feet up (a story beautifully demolished by Olly Grender the other week).

While many in the party still struggle over the tuition fees issue - I'm one of them - if we are to make progress on all the great things we are doing, we have to win the trust back. Not just from people, but also, clearly, from the press. If we can make them love Nick again, we'll know we're on track.

Good piece from Charlotte at Virtually Naked on Peter Hain actually - unbelievably - giving a response on the Metro story. Dignifying this sort of reporting really should be beneath him
Posted by Richard Morris at 12:55