What else did Nick get asked in London last week? And more to the point - how did he answer? 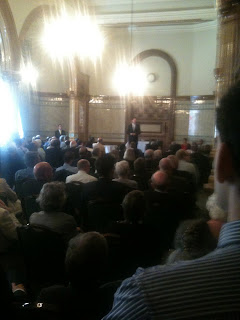 Following on from my post about Nick's Q&A session with London members last week, I promised I'd post about what else he was asked and what he said.

Obviously the perils of leaving it a few days before checking the scribbles I made , in a hot room, standing up mean that some of my notes leave a little to be desired. But here are a few highlights. Not everyone is going to agree with all he said - and I'll be paraphrasing....

My abiding memory of the whole meeting was of Nick's passion when talking about the young, especially against the backdrop of the riots. He spoke about how he felt that as a society we had consistently failed large numbers of the young in the early years (pre 8) when all their passion for learning, self confidence and sense of ambition was set. He spoke about his pride in the Pupil Premium, the provision of free nursery care for 2 year olds from deprived backgrounds and his determination that a Liberal Democrat government would make encouraging the young and giving them a springboard for life a priority. He was engaging and inspiring and his words got strong applause.

What do we say on the doorstep?

Defend the key policies that the Lib Dem's have introduced - the assistance for 2 year olds, 250k more apprenticeships, 250k already taken out of income tax, restoration of the pensions link.

In a separate question Nick spoke of his belief that by 2015 the Lib Dem's will be seen as having very separate policies from the conservatives. He spoke of his core belief that the forces of conservatism and liberalism are ultimately diametrically opposed. He also spoke of the need to ensure we got the credit for our policies and didn't take the blame for policies we didn't back. He also said he liked U turns if stopping the NHS Reforms was an example of one - better to get it right.

He reiterated his belief that we went in to the Libya campaign for the right reasons, that Libya - legally and morally - was a completely different case from Iraq, and where there was a moral imperative to act then we were right to do so.

Get more on the front foot

Nick was asked why he wasn't more on the front foot and leading on issues like the riots. He responded stridently and robustly, both pointing out what he had been doing - and reminding the room that we hadn't won the last election If we were going to lead on every issue - we needed to do better at the next election.

Again in a response to a separate question, he talked eloquently about the traditional problem we face - that the establishment, especially in the media, hate the fact that we are in power as it disrupts the normal left:right equilibrium they exist in - and we need to be counter this.

I've already blogged about his response to my question about his targets for 2015. Nick also talked of the need to stop Labour trying to promise, once the economy starts to revive properly, of claiming they were the right party to take us to the sunny uplands of new prosperity. We must never forget - and must not let others forget - that their economic mismanagement was why we are in the mess we are in, and that their fiscal plan would also have led to severe cuts, whatever they now say.

Again Nick spoke of the need to remove our dependence as an economy of the financial services sector, to promote more creative solutions to our economic malaise - green investment bank, research credits and the need for creative thinking to revive our industrial policy were all mentioned.

I can't remember the final question - but I remember Nick's answer! An impassioned appeal for more use of our own language, the language of liberalsim, of the centre, that our values and policies should not be judged j on the left/right axis, and most notable, a determination to cherish the role of the individual and the maximise the potential of each and every member of society.

He was terrific on this.

It was a great session. Nick was impassioned, confident, was not taking any crap off anyone, answered the questions head on and was very direct.

I didn't agree with every thing he said. But he was very impressive. And I left emboldened and encouraged.