3195 reasons why Aidan Burley won't be sacked by the Tories.

It's been reported that the French authorities have now launched a criminal investigation into Conservative MP Aidan Burley and fellow guests who attended that notorious Stag Night in Val Thorens with all its Nazi overtones.

You'd like to think if he was truly sorry, Aidan Burley would now resign. But I bet he won't.

And if the Conservatives were truly sorry - they'd sack him. But I bet they won't. 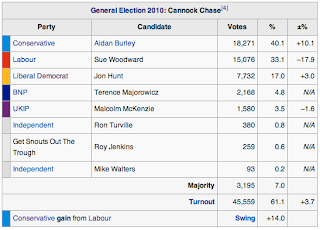 (The vote share change in 2010 comes from the notional, not actual, 2005 results because of the boundary change (loss of Huntington).)

What's more - this was a switch from Labour to the Tories - who had held the seat fairly comfortably until last year: 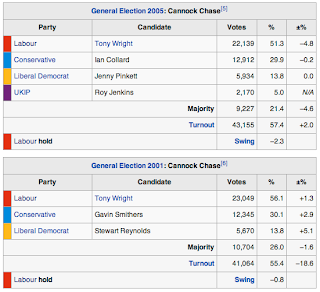 So much as I'd like to think in the era of 'a new kind of politics' the Tories would put the inherent dangers of a marginal by election to one side for doing the right thing - the realist in me is pretty certain they won't. I guess if Burley is charged and prosecuted - then this may become moot anyway...
Posted by Richard Morris at 12:47