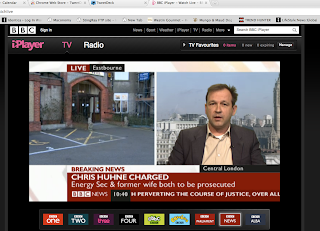 So, I was sitting in the BBC News Channel Millbank,  ahem, 'Studio' (broom cabinet) this morning as the Huhne news broke. As you can see, I was filling while everyone waited for Nick, Olly et al to walk from a door and get in a car.

I was asked my views on what the Lib Dem Grassroots were thinking. So here's what I said you were thinking (I am paraphrasing). Do feel free to yell if it's not true, as I'll be doing the same with 5 Live tomorrow morning...

A. Yes. He's a talented Minister, doing an effective job, and he will be a loss to the country. He was also one of our best Ministers at keeping the Tories in check, so he's a loss for the party as well. So he will be missed

A. Innocent til proven guilty  - so  the party at large feel very uncomfortable about this resignation. Politically and practically he probably had to resign  - but that doesn't make it alright per se.

However, unfair though it would be, if there was no prosecution, the 'no smoke without fire' calls would have gone on endlessly. This way Chris gets to completely clear his name - or not. So at least the issue is resolved.

Yes. He will be an excellent addition to the cabinet. (I went on a bit at this point, I'll save you the details).

Q. Will the Tories be glad to see Huhne go?

I should have played the 'how about a not-white-middle-class-man card' in the cabinet but it eluded me. I will do so tomorrow....