Conservative Members rate all members of the government (and why Vince may not be Chancellor after all...)

When Lib Dem Voice ran a survey asking party members their opinion of the performance of various prominent Lib Dems, the comments section was red hot with folk having a go at what they saw as a bit of a nonsense. here's one example (from a Parliamentarian, no less)...

What is the purpose of this nonsense? At best it is unhelpful, at worst potentially disastrous.
If LD Voice has nothing better to do than pursue this kind of personality based pop level politics, it perhaps ought to close down.
And members who take part in this kind of stuff should be ashamed of themselves!

So it may come as a surprise to learn that the Tories do exactly the same thing - published here on Conservative Home - only looking at ALL members of the cabinet. 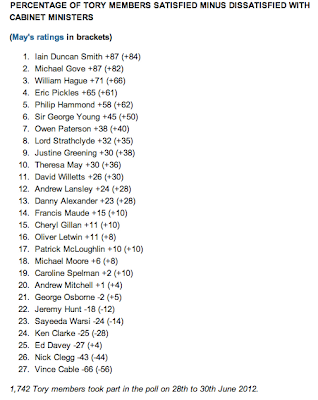 Now the Tories are most excited that Danny Alexander is seen as doing a better job than George Osborne - which is of course most interesting. And I was surprised that Gove only comes second - I would have thought that after the O level announcement, he would be top.

But look who Tory members view as the worst performing member of the Cabinet.
Good Lord. It's St. Vince.
That can't do his chances of being made chancellor any good.