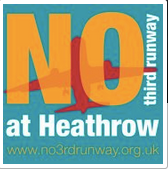 The issue of No Third Runway at Heathrow still is a live issue for many in West London, not least the good folk of Ham Common. This is especially the case when you see articles like this - reviewing the answers Justine Greening gave to a question from Julian Huppert (in the HoC) last week.

At face value, it seems like good news as Greening guarantees no change in the coalition agreement - but look carefully and you'll see, much like with David Cameron's answer in the House 2 weeks ago - there are no promises after 2015. Quite the opposite in fact.

""we must not be blind" to expanding airport capacity overall, and making Heathrow operate better when welcoming people to the UK." David Cameron, HoC

"The coalition agreement in its entirety stands and that is the position". Justine Greening, HoC, 25 June

And given Greening's enthusiasm for an extensive consultation into the whole issue - her'es how it could play out, according to David Leamount  of Flight Global in The Huffington Post...

What happens if the government finds its consultation concludes that a third runway is unavoidable? David Leamount from the aviation industry news site FlightGlobalthinks it's the only viable option, and that the government already knows this.
"Nobody really wants it but there isn't an alternative, because Heathrow is positively dysfunctional already," he told HuffPost.
"All you need is for the wind to blow a bit harder and you have to cancel things. That's what happens when you're at 100% capacity. Every single slot is in use, so you can't delay, you have to cancel. The weather twitches, and Heathrow cancels and this is not acceptable for a first world country."
Learmount expects the consultation and study on expanding Heathrow will be kicked into the long grass until the next general election.
"It won't be in anybody's manifesto," he predicts. "What they will say is that they are watching the studies, which will continue. Then after the election the studies will miraculously end and they'll implement it."

So, what can you do to help stop this? Well one small step would be to click on this link and go and leave a message on the No to the Third Runway's Facebook Page or just 'LIKE' the page.
It's another small step. But it all helps
Thanks
Here's Susan's letter asking for support