Results of my 'Which Tory for Chancellor?" poll are out... 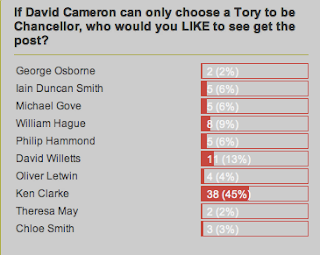 The question was 'if not Vince and it can only be a Conservative,  then which Tory would you LIKE to be Chancellor?'

It was never close.

Amusingly for most of the voting Theresa May had no votes at all - but got 2% in the end.

I was surprised Philip Hammond (6%) didn't do better, as he was Shadow Chief Secretary for so long before the General Election.

And  again perhaps it is a touch surprising that the second and third slots were taken by two of the more right wing members of the Conservatives, in Willetts and Hague.

But ahead by a country mile with 45% of the vote was the 'sixth Lib Dem', Ken Clarke.

With a cabinet reshuffle on the cards - he should probably be very worried. The Lib Dems love him Mr Cameron.