Finally: Is this 'Muscular Liberalism' in action? 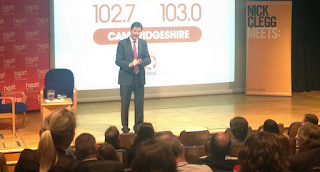 "Frankly, because of me now, thousands of 2 year olds are to get free nursery places"

When Harry Matthews (@hmatthews92 ) tweeted this from Nick's 'meet the press' session in Cambridge, my immediate thought was 'blimey, someone 's pissed Nick off royally with a question there, he sounds very arsey'. And I've heard him give a, ahem, robust responses to members in sessions in the past.

But on reflection it occurs to me that this is probably exactly the line we should be taking.

More than that, it's exactly the response we should have been taking for the last 2 years up until now.

How much better it would be if we'd been firmly taking credit (and excluding the Tories) for everything good we've been responsible for over the last 2 years - and laying the blame firmly for Tory policy at the door of both the Tories - and anyone who voted Tory. Rather than deliberately adopting a 'hand in glove ' strategy for 2 years (as  we famously did).

It's also probably a recognition (as if we didn't know) that Nick, and those around him, do recognise he needs to take a bit more ownership personally of things. I suspect he'd decided to say the words 'I' and 'me' a lot more going forward.

I hope we see plenty more of that sort of sentiment spoken loud and proud in coming months.

I'll be looking out for it.

Ha ha, shortly after I posted this, LDV posted this handy tool published by HQ about everything Lib Dems have done in government.

I imagine this is to support exactly the strategy I suggested above.

You know, it's almost as if they're listening.... 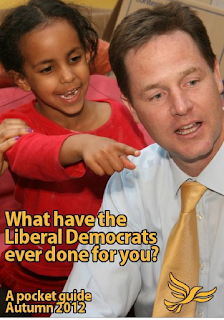