Which Cabinet job moves most often (Come on, I think you know....) (But you don't know second)

I thought I'd do a quick tot up of which cabinet jobs have changed most since the 2005 General Election.

First up here's the count: 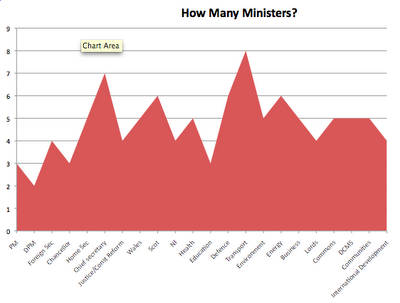 Ok - so top is Transport. No surprise there really. A series of cock ups year after year...

But who would have thought second is, no not Home Secretary, but Chief Sec to the Treasury.

In fact Home Sec doesn't make the top 5 even. So much for it being that tricky job that no one does for long - a rumour that is yet another triumph for the not-very-safe-hands-but-PR-genius that is Theresa May.

In equal third we have Scotland, Defence and Energy (recalling Energy fell under DTI until 2008, so including that Sec of Stale from 2005 until 2008).

All in all - you do have to wonder - is this any way to run a country?