An open letter to BBC Question time. That's right, another one.

I see you have Diane James on the BBC QT panel this evening. Nothing wrong with this - she was generally acknowledged as a strong candidate in the Eastleigh by election.

But it's the second week in a row you've had a member of UKIP on. Last week it was Neil Hamilton. Yet tonights panel fails to feature any Lib Dem.

You'll argue that Diane James is 'current' after UKIP's second place last week; an excellent result for them, no argument there. But we did actually win. A slightly better result.

You'll argue that we're in government - and that the government is represented. Yet I look back at past panels to last September - and find a Tory has been on every single one. Funny old world.

When I wrote to you pointing out no Lib Dem had ever been the extra guest - you were kind enough to respond and put Mark Pack in the hotseat.

I hope you'll do the same and again - and ensure a fairer representation of the Lib Dems on the Question Time panel.

Fair enough, an almost immediate reply from BBC QT. Great they read and respond to stuff 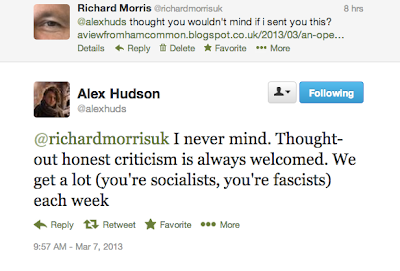