How's the differentiation thing working out for us?

You'll remember our differentiation strategy, as outlined on a napkin by Richard Reeve early on in the government and helpfully reproduced below... 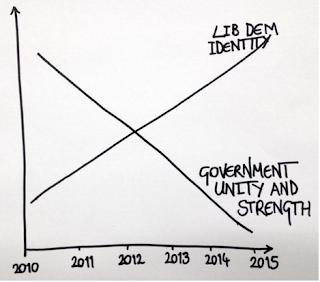 Having spent some time establishing that we are a 'grown up' party of government by working hand in hand with the Tories, in the middle of the parliament we will slowly start to extract ourselves from their grasp, reasserting our own liberal character and credentials, in good time to make it clear that we offer an alternative to the British people at the 2015 General Election.

I always thought it was a mistake. And I have to ask- how is that going?

On the one hand policies that are undoubtably Liberal Democrat feature heavily on the governments programme. The problem is - having spent so long 'not having a cigarette paper between us' that the Tories can claim them just as much as we have. And surprise surprise - they are claiming them, with Conservative Home saluting David Cameron for delivering on Equal marriage, protecting the Aid budget and  the £10k tax band. 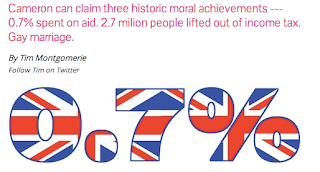 Many in the Lib Dems will point out that this will fool few people (and equally that none of these go down well with the Tory grass roots). I think they're wrong (at least on the first part). The Tories have got a lot of money to spend reminding people that it was George Osborne who stood up in the house and announced the £10K band, that the Equal Marriage Act was proposed by a Tory Secretary of State at the DCMS, that the two SoSs responsible for International Aid have been Andrew Mitchell and Justine Greening. None of that will be fair - but they have big pockets. If they want to own those policies in the minds of the British public - they probably have the ammo to do it.

Meantime, we do ourselves no favours at all in trying to re-establish our own liberal credentials. Look at the latest three big moves by the leadership - on Secret Courts, Media regulation and now Immigration. We can argue the whys and wherefore of these policies, but if we are meant to be now pursuing a strategy of strongly differentiating ourselves from the Tories, I would suggest that this is a curious way of going about it. We look less liberal than them. Which is quite an achievement.

I've always said the non -differentiation strategy was a mistake from the start. But it was the road we went down. If we're going to make it work we need to start reminding people of what we believe in our hearts

The last couple of weeks makes me wonder if the leadership in Westminster hasn't rather forgotten that napkin.

Nick - its time to be all liberal again. Could you get on with it please