The Olympic Stadium in Rio has been closed. I really wouldn't panic just yet.

The Guardian is reporting that the Olympic Stadium in Rio , where the athletics will take place in 2016, has been closed indefinitely for safety reasons. To quote the piece..

' The João Havelange stadium, which is currently used by the Botafogo football club, is scheduled to host athletics events at the Games, but engineers have discovered structural problems with the roof that could pose dangers to spectators in certain wind and temperature conditions.
"There is a risk, so I have decided to close the stadium immediately," said the Rio mayor, Eduardo Paes, who emphasised that it would not re-open until a solution was found. "If it takes a month, then it will stay closed for a month; if it takes a year, it will stay closed for a year." '
Now, I know there is a part of all of us that wants the Olympics back and so we jump on this sort of news as an indication that maybe, just maybe, it will somehow return in 2016. And similar stories about delays to rebuilding the Maracana Stadium, that will host the opening and closing ceremonies.
But honestly. Here's a picture of of Stadium in Rio today 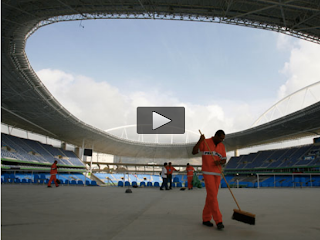 And here is a picture of our Olympic Stadium in Feb 2009, roughly the same time away from the opening ceremony in 2012 as Rio is now 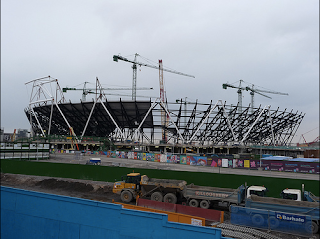