2010 Election Trivia. I love this stuff

I stumbled across the Interim House of Commons Report on the 2010 Election result the other day (don't ask) and it's full of the sort of election trivia I love. I'd recommend a swift perusal yourself, but in case you haven't the time, here are 10 brilliant stats about GE 2010.

2. The safest seat in percentage terms is Liverpool Walton, held by new Labour MP Steve Rotheram with a majority of 57.7%.  The largest majority in terms of votes is 27,826 for Labour’s Stephen Timms in East Ham.

4. The party that gained the smallest number of votes in 2010 was the Blue Environment Party, with 17 (other cracking party names included the Bus-Pass Elvis Party, Scotland Against Crooked Lawyers and The Joy of Talk Party).

5. Just 117 seats changed hands in the General Election vs the notional seats of 2005. Incumbency matters for all parties, not just the Lib Dems

6. The 10 largest constituencies (by electorate) are all in England. None of the ten smallest are in England 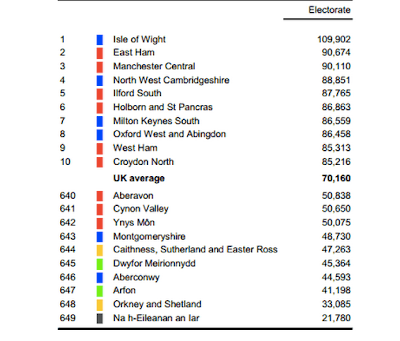 7. The highest turnout in the general election was East Renfrewshire with 77.3% . On a very parochial point, Ham Common (in the guise of Richmond Park) was third highest.

8. Only one of the ten most marginal seats (and it's the tenth) is a Lib Dem seat (Solihull); in 3 of the 10 most marginal, we came second.

9. The party with the highest % of female candidates? The Alliance Party with 33%.

....and a bonus 11th. 64% of winners had been MPs in the previous Parliament.  Five MPs from earlier Parliaments were returned, Christopher Leslie, Stephen Twigg, John Cryer, Geraint Davies, and Jonathan Evans. 227 (35%) have no previous House of Commons experience

Its got tons more goodies. Enjoy