Angela Eagle needs to learn to use Twitter properly

Angela Eagle posted this 15 hours ago on Twitter (it's 10 am on Monday morning). 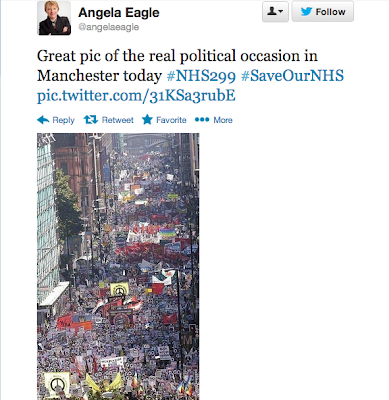 Now, I have no issue with the point she is trying to make; a large demonstration about the NHS should be reported, and Police estimate 40-50k  people attended so it should be heard.

Problem is, I'm told that isn't a photo of the NHS demonstration. It's of an anti Iraq War demo. In 2005.

Now I am quite sure this is just a mistake; I'm sure Angela Eagle genuinely thought it was the demo on Sunday and this is a simple mistake. I have no problem with that.

But what I do have an issue with is not rectifying the mistake. Twitter has been abuzz with this since last night. She must know by now that its the wrong picture.

She should delete the original tweet, and send out a short apology, sharpish. By all means then send out a repeat tweet with a picture of the actual demo.

But I think the longer this goes on, the more this looks less like a mistake and more like an attempt to make the demo bigger look bigger than it was - an appearance I am sure Angela Eagle would want to put right