My latest effort in the New Statesman  ('After Labour's leftward lurch, the Lib Dems have the centre all to themselves') has generated a fair amount of comment and one exchange in particular, which I promised to reply to properly. Here's that reply, but first, the exchange, printed below... 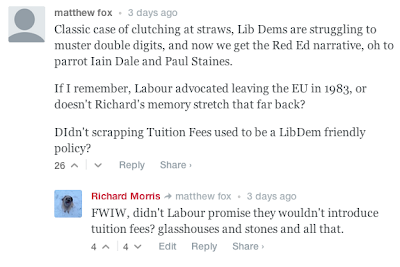 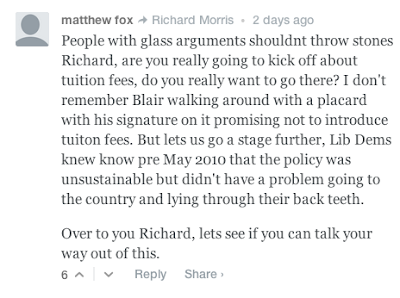 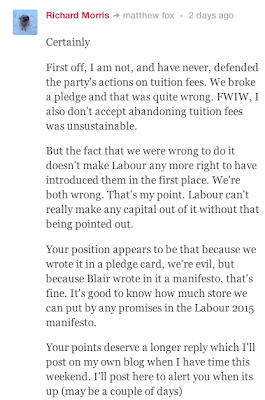 (Matthew has since added a further post about a number of other issues but I'll concentrate on the tuition fees one for now, as I'd like to deal with that point properly).

Tuition fees. Matthew, you're right -it's a tricky one for the Lib Dems. We broke a pledge which we had gone out of our way to promote, getting every MP to sign it, generally accompanied with photos of a group of approving students, and we even featured it as the opening image on a PPB when we promised a new kind of politics. 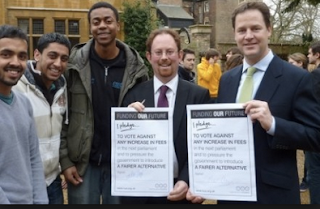 My answer to that is  - I don't try and defend it. I hold my hand up. I supported the original policy, I thought abolishing tuition fees was the right thing to do, I still think it's the right thing to do, and I am very regretful that the Westminster party did what it did. That's never changed. It's also worth putting on the record that many agree with me - including some notable members of the Westminster party itself such as Julian Huppert (pictured above) and Tim Farron, who voted against tuition fees every step of the way.

Neither have I have thought it was an unaffordable or undeliverable promise, and despite the rumours to the contrary, even the architect of the final policy, Vince Cable, says he would have voted for a different policy if we had won the general election in 2010.

"We made a commitment in our manifesto, we didn't win the election. We then entered into a coalition agreement, and it's the coalition agreement that is binding upon us and which I'm trying to honour,"
Continue reading the main story

Vince CableBusiness Secretary
"We and the Conservatives separately made a whole series of commitments in our manifesto and outside it".
"We haven't been able to carry all of them through, partly because we have a coalition and have had to make compromises and partly because we're still in the middle of this appalling financial situation"
(Vince Cable in October 2011)

It is also STILL the policy of the party in the long term, to abolish tuition fees, a policy reaffirmed in the party conference 2 weeks ago.

Now, as it happens (and bear with me here), there is also evidence that the new tuition fees regime that replaced the previous regime is improving social mobility for university entrance (contrary to all expectations).

"But equality of opportunity cannot stop at 18. The Coalition’s higher education reforms in England, though undoubtedly controversial and politically costly to the Lib Dems, mean the poorest 30% of university graduates will pay back less overall than under Labour’s fees system while the richest will pay more. Potential students seem to have noticed: application rates from disadvantaged areas hit their highest level ever in 2013."

So, does this mean we should be celebrating from the rooftops and shouting we were right to break the pledge?

Of course we should be delighted if the new scheme is improving social mobility. But we would be mad to be boasting about it because while it may have proved to work economically, it's still a political disaster, and still reminds everyone that the party that promised a new era of politics broke a stone cold sober promise, and that's cost us dear over and over again. (I accept, as I pointed out here, that there is a converse argument)

And finally, no one has ever really successfully answered the question I posed some time ago - if tuition fees work, but keep us out of government for another 80 years, then is that a price worth paying? (my answer is 'no').

So far so good, I expect you're thinking Matthew.

But here's my beef with your point. If you accept that tuition fees were either politically or morally a mistake (or even economically, although the evidence is increasingly against you here) - then Labour are the last people to be able to get on their high horse about it.

You can shout 'Fib Dems' at me all you like. But 2 weeks before the 1997 General Election, in a direct answer to the question ' will Labour introduce tuition fees in higher education' (and after Labour had submitted its proposals to the Dearing committee on higher education funding), Tony Blair replied

'Labour has no plans to introduce tuition fees for higher education'.

As C4s 'Factcheck' pointed out, that reply has been thrown back at Labour ever since.

And it gets worse

And what line of defence did Alan Johnson take to defend introducing them anyway? Here's Factcheck again..

"When that failed to impress, he appeared to adopt a third line, telling the students that even if they were correct and the manifesto pledge had been breached, sometimes it was necessary for governments to change course: "There will be occasions when politicians do have to do something different to what they said they'd do because circumstances change," he told them

Frankly I don't have a lot of time for the ' it's worse to break a pledge than a manifesto commitment' argument; because the natural extension of that logic is we can't believe anything in any Labour manifesto going forward. No, you said you wouldn't introduce tuition fees in the first place - and you did. You have no moral high ground here.

Worse, it is generally accepted that the current scheme is more progressive and fairer than the Labour scheme (there really is no argument with that). You had 13 years to sort this out - you didn't.

And what's the current Labour policy on fees? Is it to abolish them? No - it's to keep the current scheme in place. There is some talk of reducing the cap to 6k - which I would applaud. But so far it's all talk - and no mention I note, at #Lab13, of that policy.

So no, I  wouldn't want to claim tuition fees are a brilliant Lib Dem success story, nor our brightest hour in government - there's a reason why our leader ended up making that video (timed as much to appease people in the party like me as the country as a whole).

But when Labour tries to throw that particular piece of mud at the Lib Dems, we should be a little bolder at picking it up and throwing it right back at you. because you've got as much to be guilty about as we have.

PS Just realised Matthew is the same guy who described me as 'Iain Dale without the self loathing' which adorns the top of my blog :-)