Why the 2015 election matters now, more then ever

Obviously there's a lot riding on the next general election, and as our general election campaign chief, you'll feel the weight of responsibility to the country to ensure we finish with the best liberal representation you can deliver.

To that end I have no doubt you will be pursuing an incumbency strategy, looking to retain as many of our 57 seats as you can. Doubtless this is the right way to go , and the higher the number of seats we retain, the better the chances of us being part of another coalition government, and the stronger our negotiating hand will be.

But can I ask you not to dismiss the import of also maximising our general share of the vote.

It's also important as any party that believes passionately in PR should want to maximise its share of vote, to strengthen its case. Ironically, UKIP could end up helping us here, should they take signficant chare but gain little (or no) seats in Parliament

But now there's a third, important reason why we need to maximise our vote at the next election.

I've got £20 riding on the fact we'll out poll UKIP in 2015 with the Chief Political Correspondent of the Express, Patrick O'Flynn 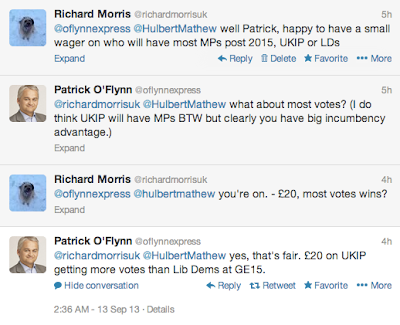 Paddy - I know you wont let me down.