Given Nick's pronouncements in the last 24 hours on Free Schools, a few things strike me...

1. As Stephen Tall has pointed out, this really shouldn't be news, in that Nick has just restated existing party policy.

2. The fact that lots of journalists think it IS news should give folk at Great George Street food for thought. As there are only 2 explanations. Either they haven't briefed journalists up until now too well on the party position - or it is so unusual for the leadership to think the same as the rest of the party in this area, that it's worthy of comment.

3. The latter is of course the more likely explanation - given that only in the last few days, the Lib Dem Minister for Education has been saying the opposite to what Nick said today, at least on teaching qualifications.

'Mr Laws: We want to ensure that teachers in schools have good qualifications and the capacity to teach. The hon. Lady [Julie Hilling (Bolton West) (Lab)] will know, however, that there are plenty of teachers who may not have formal qualifications but who still do a superb job. We are ensuring, through the Ofsted inspection process, that every single teacher has the capability to teach. All classes are assessed for quality, and that is the right way to ensure a backstop of high standards'.

4. This is also the second time in the week that Nick has been publicly seen to take the opposite view from what many (I think a tad lazily) call the 'Orange Bookers'; today he contradicts the view of David Laws, last Monday he was sacking Jeremy Browne.

As has been recorded previously, both Laws and Browne  have been approached in the fairly recent past by the Tories with an invitation to defect. It will be interesting to see if they redouble their efforts to do so now.

But more to the point - this is probably the first significant move against the 'Liberal reform' wing of the party. How will this play out internally?

5. Presumably this move to differentiate ourselves from high profile Tory Policy is the latest installment of the differentiation strategy, outlined by Richard Reeves back in May 2010, and apparently still being pursued. You have to admire Nick's determination to hatch a plan and follow it through.

6. The big issue with '5' is of course - will the voters find it credible? Remember Nick has spoken in favour of Free Schools  and voted for them albeit with very clear conditions attached.

The first wave of free schools will open this week. The idea is that parent groups, charities and other organisations can open schools where they are not happy with the existing choice. It is controversial with many, and there are risks – but I am confident we have mitigated those risks to make sure this is now a policy which will promote higher standards, better integration, and fairer chances especially for children from the most deprived backgrounds.

'Let me be clear what I want to see from free schools. I want them to be available to the whole community – open to all children and not just the privileged few. I want them to be part of a school system that releases opportunity, rather than entrenching it. They must not be the preserve of the privileged few - creaming off the best pupils while leaving the rest to fend for themselves. Causing problems for and draining resources from other nearby schools. So let me give you my assurance: I would never tolerate that.
The Coalition has made it clear that our overriding social policy objective is improving social mobility. Reducing social segregation; making sure what counts in our society are ability and drive, not privilege and good connections.
Free Schools will only be acceptable so long as they promote those goals.'

I don't think anything Nick has said today contradicts that - but will the press allow it to be played like that?

7. Finally - there is now doubt that Labour have been banking on keeping those 2010 Lib Dem voters who left the party, as this conversation illustrates rather well.. 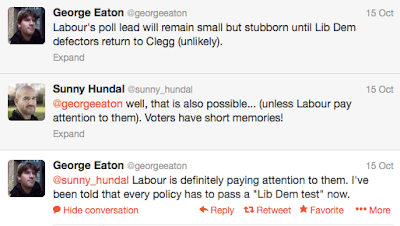 Are statements like today's a signal that the Lib Dems are now actively after those votes once again? Let's not forget what Tim Farron was saying just before conference...

'the people who are most likely to vote for you next time are the people who voted for you last time...You don’t write people off, they’re there to be persuaded to come back, or rather stay with us'.