Who will be the 'Out of Europe' candidate in the next Tory Leadership battle?

And I wonder if I don't know the answer.

Firstly: is he in the 'out of Europe' Brigade? Well, I rather think so... he certainly seems on the sceptical side...

I'm not happy with our position with the European Union. But my preference is for a change in Britain's relationship," said Gove. "My ideal is exactly what the majority of the population think, which is that the present situation is no good, to say that life outside would be perfectly tolerable.

Secondly, is he on manoeuvres? Well, the recent FT article seems to suggest so...

‘It’s ridiculous,’ splutters Gove, as he reflects on the prime minister’s inner circle. Four of this group went to just one private school: Eton College

Now, of course, many had interpreted this, not as a move by Gove for himself but as a support for his friend George Osborne's leadership ambitions, Osborne having 'only' been to St Pauls (unlike Old Etonian, Boris).

But while Gove himself frequently rules out any future leadership bid, one can't help but wonder if the Warsi incident the other night - not just the photo opportunity but her words as well - were part of a campaign to position Gove as the alternative to the establishment. 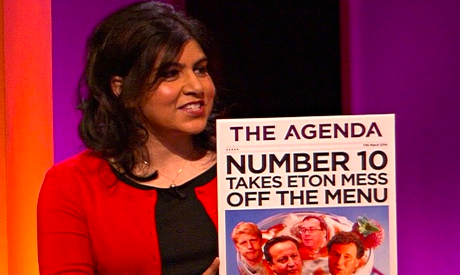 "Michael was making an incredibly serious point that it can't be right that the 7% of kids who go to independent school end up at the top tables, not just of politics, but banking and law and every other profession, and that what Michael wants to create is a first class, world class state system which means that in future years you will have more pupils from state schools, people like me, around the cabinet table, and in that I fully support Michael Gove."

And anyway, as well know, a denial of leadership ambitions often means nothing in politics...

So. Gove vs Osborne vs. May vs. Johnson