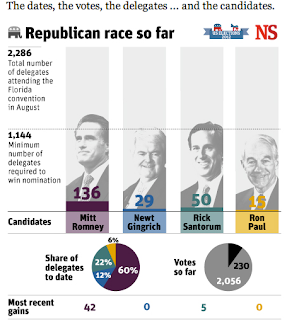 Over at The Staggers on The New Statesman website, they have a great infographic page that demonstrates the state of the race for the Republican nomination

Ahead of Super Tuesday tomorrow, here's what it currently shows.

1. Romney - despite everything - yes, even this - is a clear leader. And they haven't yet added in the Washington caucus results, which he won on Saturday

3. Major states still to vote after tomorrow include: California (172 delegates), New York(95), Texas (155) and Illinois (69). All of these will be bigger states than any than have voted to day, including on Super Tuesday. Largest to date has been Florida - a result that many people have forgotten is still in dispute.

Lots to play for still.