Owen Jones, this one's for you: Why I wish we would #dropthebill

Owen Jones sent me a fairly direct comment on my last piece for The New Statesman and not the sort that usually persuades me to write a response (and I'm honour bound to point out that this isn't the erudite and rather nice Owen Jones who wrote 'Chavs: The Demonization of the Working Class' - he's written to me to say it's not him. Told you he was nice).

But then the first Owen Jones did then ask me in a more polite manner WHY I was so opposed to the Health and Social Care Bill. And while I write with a heavy heart, given the failure of the LD Amendment to pause the Bill in the House of Commons tonight, I have never put it all down in one place. So let me explain.

Owen would like a few details and I'll get to that - but a general point to start.

This bill is incredibly complicated. It started out being something like twice as long as the original Bill that founded the NHS, and its now 3 times longer.

When I sat in on the SaveOurNHS rally last week, numerous politicians spoke well, but mainly talked in populist soundbites and slogans. But what struck me was that each of the Healthcare Professionals who spoke - like the Head of the BMA or The Royal College of Nursing - talked about their greatest fear - chaos. Make no mistake this is the top down reorganisation that David Cameron promised wouldn't happen, and people who work in the NHS are petrified that no one knows how it will operate.

A classic example of this is the touchstone argument - that the bill will allow hospitals to give 49% of their beds to Private Patients. Polly Toynbee says this is a fact, Shirley Williams says it's simply not true, Fullfact says a touch of a plague on both your houses. What a mess.

I get rather worried by the complexity of so called controls on Foundations to stop this happening. Here's the Shirley Williams defence: 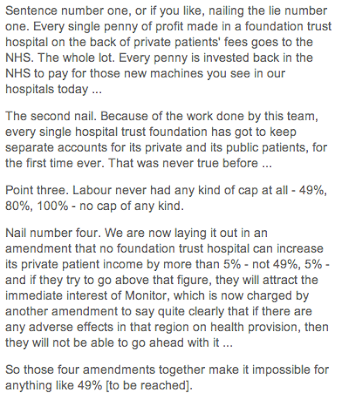 Now, we can argue that toss about each of those - number 4 I find especially worrying, as my reading of the act indicates that Monitor actually has dual responsibility for delivering on value as well as effectiveness with neither having primacy over the other. But while I understand all those amendments - I think it's complexity leaves a lot of room for confusion and disorder. And that's before you argue the toss about the 49% limit. Judicial review anyone?

Let's also not pretend that this is solely about handing control of budgets to local commissioning bodies. As Martin Tod pointed out in his speech to conference on Sunday, 40% of the NHS budget will be handed to a new national commissioning body. Skipping over that this is counter to every desire we have as a party to let local people decide their own priorities, again it's a new complication.

And that's before we start on the money. Labour says the costs of the reorganisation will be £3bn. The Tories say short term it's a little over £1bn but will lead to savings of £4.5bn. Fullfact indicates no one really knows so the the truth is somewhere in the middle most likely

But what a risk to take  - especially in the current economic climate.

I have been surprised by how many people in the party have contacted me to assure me that there's no risk. To which I say - how do you know? There is of course an independent report on the risks. It's called The Risk Report. And Andrew Lansley has decided we shouldn't see it - even in the face of a court order to do so. He is of course doing nothing wrong - he is following the judicial process as the law allows. But why on earth are we rushing through legislation before we know all the facts - and the risks.

And if there is no problem with the Risk Register Report - why isn't he falling over himself to publish it?

I could go on. I do  not think it is accurate to say that the Secretary of State for Health's total responsibility for providing Healthcare free at the point of need has been restored fully from the original White Paper (it's better - but not better enough). Anyone working in a CCG with a financial interest in a provider now has to declare it (they didn't in the original draft - unbelievable) - but it doesn't stop them still using that provider.

Evan Harris pointed out many other concerns here

Finally, Owen, whose original comment prompted this piece, rages that I shouldn't listen to every professional healthcare organisation in the country, all of whom have objected to this bill (if you click on no other link in this piece, click on that one - it's amazing) but make my own mind up.

And plenty of people - even Shirley last weekend, and Lord Clement Jones today - are trying to tell people in the party that they don't understand the changes that have been made.

Well, as I hope this piece demonstrates, I have thought about this a lot. I have been to rally's, read the commentary from the Royal Colleges, talked to a lot of Doctors ( declaration - I am married to one), and generally made my own mind up. I am also not one of these people who believes that this is the end of the NHS, nor that some reform of the NHS isn't needed - our manifesto at the last election made it clear that we did

Please, Members of the House of Lords, suspend approving the third reading of the bill until the Risk Register is published.

The NHS does need some reform. But not like this and not with this terrible piece of overcomplicated legislation.