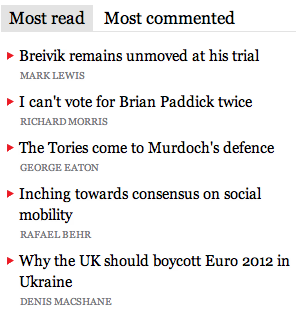 My piece from yesterday's New Statesman. Proving quite popular. Do pop over to see the comments... And all the very best to all our candidates today, especially my local GLA candidate Munira Wilson, Leader of the Lib Dems on Richmond Council Stephen Knight (second on the GLA party list) and Jane Norman in the North Richmond ward By-election.

I love the ceremony of voting. I like the stroll down Lock Road to the polling station, the good natured hello’s to the party folk, friend and foe, at the door, the hushed librarian tones of the officials, the crispness of the blank ballot papers, the stubby pencils, the lot.
But I will enjoy it less than usual this time. Because I don’t know, with a day to go, who to vote for.
Don’t get me wrong. I will be voting Lib Dem. I shall happily support our local GLA candidate Munira Wilson, confident she will do a wonderful job. I will cross fingers as I vote Lib Dem in the party lists, hoping this time our local leader, Stephen Knight, gets over the line, as well as the inspirational Caroline Pidgeon. And I will happily put a great big cross against Brian Paddick’s name, who has run a brilliant campaign and shown a better grasp of core issues like housing or policing than any of the other candidates.
But at that point the misery kicks in. Because in the London Mayoral election I have the chance to express a second preference, on the off chance Brian doesn’t make it over the line. And for me and all Lib Dems, it’s a rotten choice.
Lots of fellow party members have been making warm noises about the independent candidate Siobhan Benita – but she’s pro-third runway, which is a red line issue for me and the good folk of Ham Common. The UK Independence Party are anti-third runway (it’s one of the reasons I’ve been tipping Zac Goldsmith as a potential Tory defector in their direction – been a couple of weeks now, he’s still not denying it). However , ‘no-third-runway’ is just about the only policy I have in common with Ukip, so they’re a no. When I answer blind policy questions to tell me who to vote for, I find I have much in common with the Green Party. But I’m voting for a Mayor, and do I want Jenny Jones to be the leader of this great city? Sorry Jenny, but no, I don’t. And anyway, everyone tells me that if a second preference is to count, I have to select either Ken or Boris.
My problem with Boris is not that he isn’t a likeable character – but I struggle to think of what he’s done. There’s the bikes – but that wasn’t his idea in the first place. There’s the new buses. Which look lovely but don’t seem to have been the most brilliant way of spending gazillions of pounds.  And that’s pretty much it. After 4 years I have no sense of radicalism, of excitement, of a crusade to make Londoners lives better.
Which to be fair to Ken, I do have.  But can I really vote for a candidate who is clearly making all sorts of promises that I just don’t believe he can keep – like the return of the Education Maintenance Allowance (EMA). And who half of his own party wishes they hadn’t selected  (and no, I don’t just mean Dan Hodges).
So, a loveable rogue who doesn’t inspire me or the candidate Labour wishes they hadn’t chosen in the first place.
It’s not much of a choice is it? And this is to elect a politician with the largest electoral mandate in the country?
I shall probably find myself banging my head in frustration on the table on the voting booth.
I wish I could vote for Brian Paddick twice.