The Lords: How the Tories will fight us... 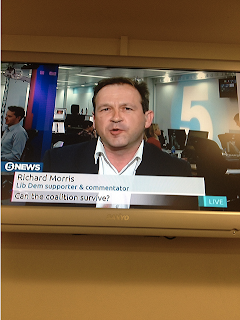 Thanks to the wondrous Helen Duffett I had the treat of appearing on Five News on Tuesday evening where i got to debate Lords Reform with Peter Bone MP. And what fun it was. And while I don't agree with a word that man says, its only fair to say that he was a courteous and good natured opponent.

What the debate did illustrate was some of the attack lines Tory opponents of Lords Reform are going to deploy - because he deployed them. So here a a few of them  - and my replies....

1. (The classic): 'The economy is what matters, we should be concentrating on this and nothing else'

Of course you're right - reducing the deficit is the governments priority above everything else, and the coalition document makes that clear. But governments are capable of doing more than one thing at a time - and no one honestly claim that our democratic institutions are working perfectly and with the full support of the people currently. Quite the opposite.

2. This is a Lib Dem policy and no one else in the country wants it

Lords Reform is a Lib Dem policy. But it was also in the manifestos of the Tories, Labour, The Greens - and yes, even UKIP (this gave Peter a moments thought!). In fact 95% of people who voted in the last general election voted for a party who supported it. And the other 5% were mainly nationalist party's with a different constitutional fish to fry (for example the SNP support reform - but want Independence from Westminster rather more!).

It is not a Lib Dem policy. It is a universal policy. Which incidentally means it should have universal support between the parties...

3. Why should a party polling the same as UKIP have any sort of policy initiative?

And also irrelevant - it's the last general election that counts.

But it's also an odd argument for a Tory to make - because essentially it's saying your influence should be directly linked to the size of your support - which sounds like an argument for proportional representation to me...

4. It's an unnescary reform - the system isn't broken.

Isn't it? In the local elections here turnout was around 30%. In the French Presidential Election, turn out was 80%+. I'd say there was a problem with our system - and it needs fixing. We people to be re engaged with politics - and Lords Reform is a small step in that direction