Would we do a deal with Labour? 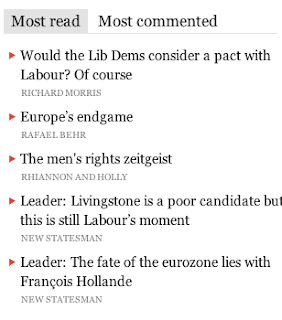 Rather flatteringly my piece yesterday for the New Statesman was most read on their website (perhaps not surprisingly given its subject matter) and has attracted plenty of less than flattering comment (do pop over there to see them in all their glory!)

"Lickspittle". It’s a great word to use as an insult, rolling deliciously off the tongue in all its onomatopoeic glory. The sort of thing New Statesman readers write about me in the comments section on a weekly basis. And I’m sure it reflects how many Labour supporters genuinely feel about the Lib Dems, collaborators with the evil Tories.
Only it wasn’t a Labour member who threw that particular bon mot in our direction from the green benches. It was a Tory. With friends like that, eh?
So when I get asked, should the electoral arithmetic in 2015 end up suggesting a Lib Dem coalition with Labour, would we consider it, it’s a bit of an eyes to heaven, and deep sighs all round moment
Of course we would.
Does anyone really think after everything the Tories have thrown at us – including just the other week the Prime Minister telling his PPCs that he has effectively dealt with us  - that the odd insulting speech or overture to our support would block us dealing with Labour? And for all the "Yellow Tories" insults, we’re not Conservatives. Nor are we Labour. We’re Liberals.
This is not to say that there wouldn’t be some hurdles to overcome. We’d have to be convinced that we would genuinely get more Liberal policies in place, like taking 2 million workers out of tax altogether (let’s not forget, Labour MPs voted against that – what were they thinking?). We’d probably take a view on how progressive Labour had been over supposedly shared ambitions – Lords reform being an obvious example.
And this time, ahead of any negotiations, we’d have to rethink our strategy in government.
Having maintained from the word go that the "not a cigarette paper between us" strategy in government was the road to disaster (however short term a tactic it may have been) I believe any negotiations with potential partners in government must include some safeguards about what areas of policy we would own – perhaps giving us responsibility for single departments rather than shared responsibility across all. (Tim Montgomerie was suggesting the opposite yesterday, indicating he felt an end to the current differentiation strategy is a good idea. Maybe for the Conservatives. Not for us, thanks).
And of course, there is the danger that, having gone into coalition with the Tories, jumping into bed with Labour will lead to the accusation that "they’ll sleep with anyone". Which will only be avoided by setting up some pretty clear criteria for who’ll we’ll talk to up front, before a vote is cast. And honestly, if that’s the worst of it, I think we’d cope.
I know Labour doesn’t want to talk to us. Of course you don’t and you’re probably already trolling "dream on" remarks in the comments section. You want to win a majority off your own back. I don’t blame you. For what its worth, I want the same for us.
But if you the good people of Britain decide that a Lib-Lab pact is the way forward in 2015, I’m not going to turn my face away in a sulk. And neither, frankly, is Ed Miliband.
We’ll see you in 70 Whitehall.