The Lords Reform Bill - Here's a summary of what's in it. 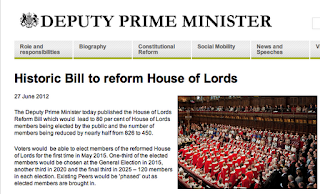 Via the Office of the Deputy Prime Minister

The Deputy Prime Minister today published the House of Lords Reform Bill which would  lead to 80 per cent of House of Lords members being elected by the public and the number of members being reduced by nearly half from 826 to 450.
Voters would  be able to elect members of the reformed House of Lords for the first time in May 2015. One-third of the elected members would be chosen at the General Election in 2015, another third in 2020 and the final third in 2025 – 120 members in each election. Existing Peers would be ‘phased’ out as elected members are brought in.
In total, 80 per cent (360 members) of the total of 450 members, would  be elected. The remaining 20 per cent (90 members) would  be appointed by a statutory Appointments Commission on a non-party basis. There would  also be 12 Church of England bishops, a reduction from the current 26 church representatives, reflecting the smaller overall size of the Chamber.
Under the Bill, members of the reformed House would  serve for 15-year terms of office, and they would only be allowed to serve for one term. Elected members would  be picked using a Semi-Open List electoral system, giving voters the choice of voting for a party or for an individual in their region.
The Government is committed to ensuring that the cost of running Parliament does not rise significantly. The salary, staffing and administration costs of the new look House are not forecast to rise substantially and are expected to be offset by savings from reducing the size of the House of Commons. There will be a net saving between 2015-2025; once the reforms are completed the real terms cost of Parliament is anticipated to be broadly the same as it is now.
The reformed House of Lords would  not challenge the historical primacy of the House of Commons. The new Bill specifically states that the Parliament Acts of 1911 and 1949, which define the relationship between the Houses, remain in force. The Government listened to recommendations on this issue from the Joint Committee on the draft House of Lords Reform Bill and made changes to the draft legislation published last year. The Government’s response to the Joint Committee’s report is also published today.
The Deputy Prime Minister said:

The coalition stands on the brink of an historic achievement.  After more than a hundred years of debates, cross-party talks, Green Papers, White Papers, Command Papers and a Royal Commission, we are finally introducing a Bill to create a democratic and legitimate House of Lords.
“It cannot be right that ordinary, hardworking people are expected to obey laws that are created by people appointed entirely by birth or patronage, who have a generous pay packet and a job for life. The time for idle talk is finished. Now is the time for action.”

Everyone in government is very grateful to the cross-party Joint Committee of MPs and peers for the hard work and detailed scrutiny they gave to our proposals. This legislation would not have been possible without their commitment. I very much look forward to working with members who served on the Committee to ensure that the Bill they helped to shape is passed into law.

1. The House of Lords Reform Bill was introduced and received First Reading in the House of Commons on Wednesday 27 June 2012.
2. The Bill and supporting documents are available to download from official-documents.gov.uk.