Stop patronising Chloe Smith. She is a Minister of the Crown and she was awful.

Lots and lots of talk about how terrible Chloe Smith was on Newsnight last night. I watched it and she was utterly appalling. And indeed, I tweeted as I watched, that I felt sorry for her.

I now regret that. It was patronising and condescending and we should all stop it.

Yes, George Osborne is a wimp. No wonder he's called 'Submarine' behind his back, only surfacing when the coast is clear (Gordon Brown was was known as MaCavity after the TS Elliott poem - "MaCavity's not there" - for similar reasons)

But that's no reason to forgive Chloe Smith though. If she's going to be a Minister of the Crown, she needs to be able to handle interviews like that with rather more aplomb.

1. She was defending the suspension of a rise in fuel duty (not quite a tax cut but near as damnit). That shouldn't be hard

2. She should have known the obvious questions she would be asked - and had her answers prepared. She had clearly done no prep. This is especially strange considering....

3. I'm told she had been through this exact same interview on C4 News at 7pm. Twitter told me this was a similar car crash. Did she learn no lessons? And after the 7pm shambles, why didn't Tory HQ prep her?

There's no doubt this whole episode has been a shambles from start to finish. From the U turn itself, Tory Whips briefing against the policy just 2 hours before it was announced (hat tip to Paul Waugh who got hold of the briefing notes Tory Whips were giving out) and the failure to offer any explanation of how it is to be paid for, #omnishambles doesn't come close.

Anyway, here's the interview. And after that, the 'The Thick of it' version. Weirdly similar you have to agree...

Ha. Nadine Dorries has now weighed in to defend 'poor' Chloe. With friends like this eh... 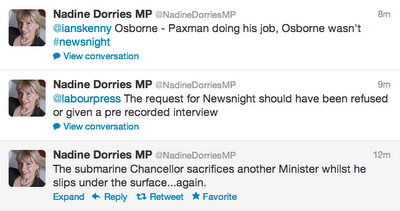