Someone had a bad day at Leveson yesterday. It wasn't Jeremy Hunt. It was his boss 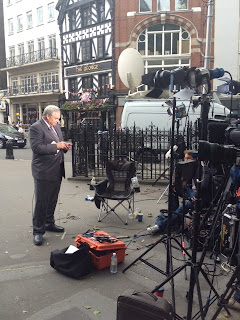 So, I was live on Sky News yesterday lunchtime outside The Royal Courts of Justice, where Jeremy Hunt was being questioned in the Leveson inquiry and Adam Boulton asked me whether anything we had heard that morning really mattered?

And actually I think it did. But less so for Jeremy Hunt and rather more so for David Cameron.

Firstly, Hunt. Now don’t get me wrong, I think he’s in it up to his neck. But rather more because he may well have misled Parliament, than for the bias issue. He has told Parliament that he made…

…since when ‘that memo’ to Cameron has appeared suggesting he was doing just that. And last year he told Parliament he was releasing…

"all the documents relating to all the meetings, all the consultation documents, all the submissions we received, all the exchanges between my department and News Corporation"

…but again, at Leveson (during the James Murdoch testimony) a ton of new data was released that had previously been unseen.

If Labour is wise, in the forthcoming debate, they will target their fire at these two areas – demonstrably prove either of the statements Hunt made to Parliament are false, and he will have little option but to resign.

But on the main issue raised at Leveson yesterday –Hunt’s demonstrable bias for the Murdoch bid – gives him less of an issue.

Firstly, Leveson has been clear that he has no mandate to rule over whether the Ministerial code has been broken. So while Cameron may want to declare to the world Leveson has given Hunt a clean bill of health, in truth he is not going to rule one way or another.

But more to the point – Hunt hardly hid his views about the Murdoch bid. Indeed just before being given responsibility for the bid, he had written that memo to Cameron in which his views are plain.

So the issue is not Hunts bias; rather, it is Cameron’s judgment in appointing him the first place, which is clearly at fault.

And in the long term, it is this that will cause Cameron the biggest issue. He will regret setting up the Leveson inquiry for some time to come.

Here's the Tweet Adam Boulton is sending above. I know because he asked me how to spell 'Plane' as in 'Plane Tree...' :-)