Why I think I know better than some Times columnists 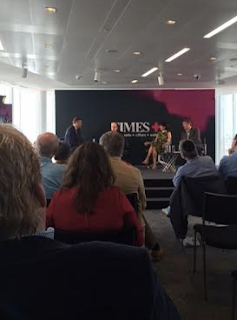 Those souls unfortunate enough to follow my Twitter feed (@richardmorrisuk , go on you know you want to) know that I was live tweeting from the News UK building yesterday, where 4 Times columnists – Tim Montgomerie (chairing), Lord Finkelstein, Jenni Russell and David Aaronovitch were debating the election.

It was grand in every sense

But there were 2 fundamental areas in which I disagreed with certain members of the august panel. And these were:

1.There is no future for the Lib Dems

Which I will spend the next 5 years debunking so no point going on about it it here.

2. The Conservatives are more likely than Labour to win the 2020 General Election.

(Update - Lord Finkelstein has tweeted me to say neither him nor Tim Montgomerie offered an opinion on this. Certainly Tim was chairing so was suitably neutral on all questions and if Lord Finkelstein says he didn't contribute to that issue, fair enough - happy to make that clear).

While of course I will spend the next 5 years fighting for an (unlikely) Lib Dem victory (!), I believe if either of the larger parties are to win in 2020 it's much more likely to be Labour.

1.It’s very unlikely the Tories will increase their number of seats in 2020 (even with boundary commission changes). The party in government increasing its seats has happened just twice since 1945 (1983 and last week); never twice in a  row – and that’s a lot of history to contend with…

More than that – circumstances have changed. Last week it wasn’t a Conservative government increasing its seat share – it was a Tory Government replacing a Coalition government, so the convention or rule that you can’t increase your seats when your party is in government is not strictly in play anyway. Next time it will be.

Other factors also make the other time the rule was broken (1983) an anomaly. In 1983 the incumbent Government had just won a war – let’s hope that isn’t the case in 2020. It had a leader who, may have been hated by many but was admired with equal fervour by a roughly equivalent number. Cameron does not generate the same emotions and anyway will be gone by 2020, by his own hand most likely. And the Tories were fighting Michael Foot and the longest suicide note in history. I would contend that Labour has just had its ‘Michael Foot’ election – and it’s left them with roughly the same number of seats as Michael Foot won (as David Aaronovitch pointed out). A swing to the centre – whoever wins the Labour leadership – seems likely.

All of this means Labour will start eating away at Tory seats in 2020. And remember – they only need a net loss of 6 to lose their majority

2. Ed Miliband will not be leader of the Labour party next time. That’s got to help.

3. It’s unlikely Labour will lose all but one constituency in Scotland in 2020. There will almost certainly be some sort of recovery, however limited. This won’t eat into the Tory majority as those wins will be from the SNP – but it edges Labour closer to being the largest party.

4. The Lib Dems will do better next time. And take votes from the Tories in the South West and SW London. The argument goes that the party will become progressive again over the next few years, and this may well be true. Received thinking therefore is that this will hurt Labour. But whoever has been leader, we have had a traditional base in the SW and any revival of this will hurt the Tories not Labour.

And then there’s this:

5. The Tories may be riding high and feeling pretty good right now. But then, they did in 1992, just after John Major won a surprise victory. Then we had 5 years of Conservative rule with a tiny majority, bastards pissing in and out of tents, back me or sack me leadership votes and a party riven asunder by Europe.

History does have a habit of repeating itself. And let’s not forget John Major had a majority of 21. Not 12.

I think its very easy to back the Tories now – but actually, leadership aside, the cards are stacked on Labour’s side of the table.

It’s also worth remembering that yesterday was the 21st anniversary of John Smith’s death. It was several more months into the Major government before Tony Blair became leader, in 1994. This suggests that Labour have plenty of time on their side.