A row I've been trying to stay out of. And failed.

There's been a lot of debate over recent days about Tim Farron signing the 'Christians in Parliament' letter to the ASA, asking them to overturn the ban on Christian advertising promoting Faith Healing.

There has been an excellent defence on LDV from Stephen Tall, and an  equally good reply on LDV from David Parkes

With all due respect to both these views, I think they have missed one crucial factor out of the debate (which I've also not seen anywhere else): fairness.

Much of the debate has been contrasting the treatment of the Christian advertising - which has been banned on the basis that they cannot scientifically prove their claims, as they are based on Faith - with that of pharmaceutical advertising, which can be proved. I would contend this is the wrong comparison.

The ASA needs to be seen to be even handed (I know something about this having worked in advertising for twenty plus years). The two groups the ASA will be keen to treat equally are not 'Christinas' vs. 'Scientists". It is 'Christians' vs. Aethiests.

The ASA has a strong track record on treating both these sides equally.

In 2009, the sixth most complained ad in the UK was this, from the British Humanist Association

Interestingly, the most complained about ad in that year was this one, from the Christian Party 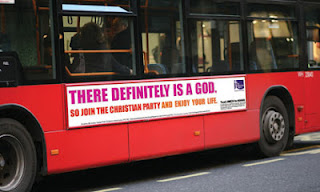 In both cases, the ASA ruled that that they would not adjudicate about the advertising, because (according to The Telegraph):

"The ASA did not investigate the advert - a response to a British Humanist Association (BHA) poster reading: ''There is probably no God. Now stop worrying and enjoy your life'' - because political party campaigns are outside its remit.

The ASA also did not investigate the BHA ad, which was the sixth most complained-about campaign with 392 objections, concluding that it was an expression of the advertiser's opinion and not capable of being objectively substantiated."
On this basis, the ASA ruling on the Faith Healing ad will be based on the fact that this is not a political ad, but instead is promoting the claims of a specific service or product, which cannot be substantiated.
The argument that a pharmeutical company can prove its claim whereas the Christian organisation cannot is therefore a false comparrison. The unfairness will arise if an organisation such as the BHA tries to run an advert saying that Faith healing does not work - and the ASA allows it. That indeed would be double standards.
Meantime, I suspect that the Christians in Parliament campaign has succeeded in generating far more publicity and conversation about the merits of Faith Healing than the original campaign ever would have. So their appeal has, in that sense, already worked.
I should make it clear here that I am not promoting one side or the other in this debate. I am merely pointing out that nothing the ASA has yet done has been treating one side differently to the other.