This democracy business. It's really under the cosh, you know....

When I wrote my piece 'Saving capitalism? The Price could be Democracy' for The New Statesman last week, I wondered if I'd get a lot of 'don't be ridiculous' type comments at my gross exaggeration of the threat to our civil liberties and human rights.

Rather worryingly, the opposite has happened. Everyone seems to be agreeing with me.

Certainly the comments section on my piece is generally in agreement (although one chap in particular has taken a rather unfortunate line - B. Small, I'm talking to you...)

Even before my piece was published, Paul Mason was asking similar questions about the fate of democracy in the Eurozone (didn't go down well with Sarkozy...).

The Guardian has reported this morning that a third, unelected group is now running the levers of power in the Eurozone.

"My colleague David Gow, who is racing to Brussels from Athens, points out though that the levers of power are really in the hands of a third, more secretive group:

It was formed at the October 19 Mozartfest in Frankfurt's Alte Oper to say goodbye to Trichet as president of the ECB. This octet controls, or think it does, the eurozone and - memo to Dave and George - the EU. To whom do they report on their talks, say, with Obama or Wen Jibao?....

The group should not be confused with the Frankfurt School: the philosophers Adorno, Marcuse, Horkheimer et al who mounted a sustained critique of American cultural imperialism in the 1960s. Times change."

While The Telegraph points to another unelected body that is making a concerted effort to topple the Italian Government - the markets..

"This graph shows just how keen markets are to wave goodbye to Berlusconi. Italy’s benchmark share index, the FTSE MIB, surged this morning on the rumours that he was about to resign - before dropping back as he denied the chatter. But the index is still about 2pc up, suggesting people are not convinced by the official line". 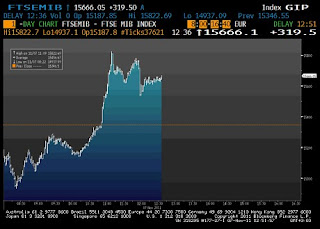 And now, Christine Lagarde, Head of the IMF, has this morning said that Sovereign nations need to start ceding some...sovereignty.... (again, I am quoting The Telegraph here...)

'Euro nations must "cede a little bit of authority, budgetary sovereignty" to overcome the crisis, Christine Lagarde, IMF managing director said. “Critical decisions” have been made by the European Union to resolve the crisis,’’ Lagarde said in speech at Moscow’s State University of the Ministry of Finance. Ceding some sovereignty is required implement the deal “to the benefit of the global economy as a whole.” '

I could go on...let's not forget it wasn't too long ago that our own Prime Minister was suggesting we should start curtailing the free use of social networks to control the people - and getting applauded by the Chinese Government as a result.

But I think my point is made. Democracy is under assault here. Panic is setting in, and democracy is apparently the first thing our leaders run roughshod over to protect Capitalism. And we need to be alert to this - and stop it.

So on a happier note, enjoy this Ted Talks presentation -that (despite some dodgy shooting from the hip with the examples chosen) presents a happier suggestion that maybe, just maybe, Democracy is a more productive system under which Capitalism can flourish than the totalitarian alternative (hat tip to @nicola_prigg for sending me the video).

Meantime everyone, back to the barricades.

Sorry - can't resist. here's what The Guardian says is happening in Greece right now; does this sound like democracy in action to you...

"Formally the governor of the Bank of Greece for almost eight years, from October 1994 to May 2004, Papademos is widely regarded as a "neutral figure," who is well respected in Europe and would be a safe pair of hands at the helm of government. But friends who know him well have told our correspondent that Papademos, who is also a well-respected academic, is unlikely to agree to the job without carefully weighing things up first.

"As things stand, the leaders of both political parties want to give him his cabinet, tell him what to do and let him go by the end of January. It's a recipe for disaster," said Stefanos Manos a former conservative finance minister.

"Lucas is a thoughtful person, an honest guy, a clever person but he's also very cautious ... he's going to want to lay down his terms and as they stand I very much doubt that he will accept. I don't think for a moment he is willing to be a puppet PM."

The confusion may well mean that nothing is decided before this evening, when markets in Europe have already closed and Wall Street could be getting edgy."
Posted by Richard Morris at 13:45