Here's a picture of the UK politician in charge of negotiating Brexit. 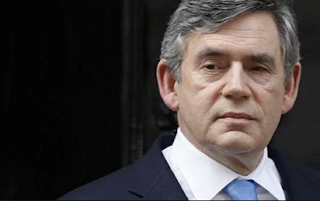 It's not who you were expecting is it?

Indeed, he's not currently even in any elected office. Never the less, he's not only negotiated Brexit, he's already signed all the papers

So how come we don't know about it?

Well, we do. It's a matter of public record. It's called the Treaty of Lisbon and it was signed in December 2007

And as the ever thought provoking David Allen Green has pointed out it makes clear the terms of our departure from the EU. The 2 years from the triggering of Article 50 are the transitional period - and that is all about logistics, not terms of departure.

This is, I believe, the mistake made by both Leave and Remain sides (though in fairness not the most extreme end of the Leave side) - the assumption that the negotiating hasn't started yet. Whereas in fact its effectively finished - unless both sides choose otherwise.

Which could make for a very short meeting the day after we trigger Article 50. Aptly enough a meeting likely to take place on April 1st.

The electorate in the forthcoming by election voted 69% Leave in the referendum. We were 5th in 2015 - behind an independent.

So we've got no chance in the by election, have we?

We have historical strength in the constituency - we came second in 2010. So presumably there's still a party machine and some great activists in Stoke.

And here's the thing. Labour is making all sorts of Leave noises in an attempt to bolster its vote. UKIP will do same times 10. Tories ditto - and the latter two were neck and neck last time.

Hoovering up the remaining 31% of Remain voters means under the vagaries of FPTP - we win.

I'm not saying its fair or right. Because as we know, FPTP is neither fair nor right.

Good report in Buzzfeed on Zac's election expenses, suggesting he may have spent £95k on his campaign.

My favourite part of the story is this

To which i can only add 'tell me about it'