Do you think by any chance these 2 Starbucks stories are related?

From The Guardian on Wednesday 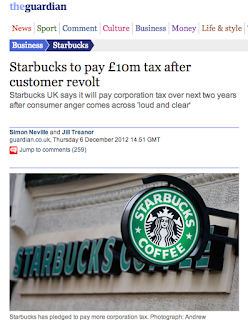 And from The Guardian on Monday... 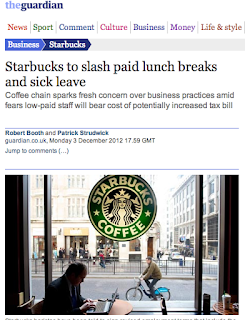 Posted by Richard Morris at 10:15 No comments:

While there’s no point trying to pretend last week’s by-election results were anything other than awful for the Lib Dems, the silver lining comes from a surprising direction – the success of UKIP. For while the Lib Dems and UKIP are poles apart philosophically, there are some huge in-built electoral advantages to the former in the rise of the latter
Nationally, a fall in the Lib Dem share of vote is ultimately more likely to benefit Labour in the 2015 election – a fact which is well understood in No. 10, and why Nick is allowed a fair amount of Tory bashing. But from the Lib Dem end of the telescope, there are a lot of Lib Dem seats where the Tories run us a close second. Hence the Conservative target seats now being published include a high percentage of Lib Dem-held marginals – half of them in fact.
But a rise in the UKIP share of the vote throws that plan into trouble. Few core Lib Dem voters are likely to switch to UKIP in those constituencies – but a rise in the UKIP vote is likely to hit the Tories hard. Maybe not enough for UKIP to win – but certainly enough to stop the Tories getting past the Lib Dem incumbent.
Secondly, the Tories need to respond to the UKIP surge – and will want to rush to the right. And any move to the right by the Tories to counter UKIP leaves more of the centre ground open to the Lib Dems, just as the differentiation strategy needs it.
But these are just tactical advantages to the Lib Dems. There’s a greater prize. As the excellent Lib Dem blogger Mark Thompson points out, the inherent unfairness of UKIP polling at 10 per cent but gaining zero Westminster seats in a general election (thanks to first-past-the-post) is likely to reignite the debate around electoral reform. The net effect of a UKIP surge removing votes from the Tories and at the same time handing Labour a landslide election victory is likely to energise the debate about proportional representation (PR) on the right.
And every Lib Dem wants the PR debate and electoral reform at the top of the political agenda. So, rather than resulting in our demise, the surge in UKIP support could actually be the saving grace for the Lib Dems. Funny old world, politics.