My take on the Clegg speech (from the New Statesman.

I thought Nick spelt out a clear narrative going forward for the party in his speech at conference. And I liked his speech more the second time I heard it, and even more when I read it.

Judging from my twitter feed amongst party members, I'm in a minority on this one.

However, I've stuck my neck out and said what I think in the New Statesman. Do pop over there and have a look at the normal forthright comments. But here's what I said..

"I asked Nick Clegg yesterday at Lib Dem conference for a short description of what we stand for. What is the liberal language we should be using in our everyday conversation? What's the elevator sell?

I rather liked his answer: "We should answer the call of the head and the heart." By this he meant that we should offer the fiscal responsibility the country needs (and Labour can't claim to have delivered) and also ensure that the life chances of every person are never blighted by the circumstances of their birth - everyone should have an opportunity for greatness. The 'caring' territory that the nasty party (not my phrase) would struggle to own".

Reading the above makes perfect sense in the context of Nick’s speech to the Lib Dem conference yesterday. What’s interesting is that I wrote the above 12 months ago at the Birmingham conference. And here we are, 12 months on, and the message remains the same

"Are you ready to trust Labour with your money again? And do you really think the Tories will make Britain fairer? Because the truth is, only the Liberal Democrats can be trusted on the economy and relied upon to deliver a fairer society too".
And the other truth is that it’s been this ever since we entered government
Leading up to Nick’s speech, there was no shortage of advice about how we should restore our standing in the polls and in the eyes of the electorate. "Turn left" was the advice of the Telegraph's Mary Riddell – "The party’s voters won’t allow a deal with the Tories in 2015 – it’s time to make eyes at Labour". Keep right was the advice of Richard Reeves, Clegg's outgoing director of strategy, in the New Statesman– "Any attempt to position the Liberal Democrats as a party of the centre left after five years of austerity government in partnership with the Conservatives will be laughed out of court by the voters – and rightly so".
But Nick’s message from the last week is clear: yes, I have made political mistakes, but my principles have stayed the same. And for the second half of this Parliament, I will demonstrate that we remain an economically responsible and socially liberal party and you will see that.
The chatter around the grassroots throughout the conference was pretty consistent. Yes, Nick’s got stuff wrong – and large swathes of the party remain livid about it. Yes he’s got a lot to prove – to us, even before the rest of the world. But the next 12 months will show if Nick can deliver against the agenda he outlined yesterday. And if the electorate is willing to give him a hearing.
The party has approved that agenda, supporting the leadership on its economic strategy, while giving it a bloody nose on socially illiberal Tory led policy like "secret courts".  Now let’s see the leadership deliver. The grassroots – and the electorate – are watching. And the clock’s ticking ...

Oohh its the most read and most commented piece on The Staggers. How lovely! 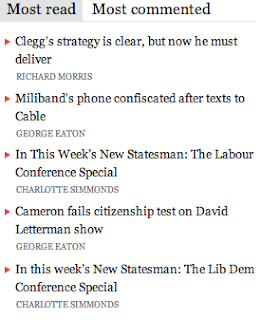 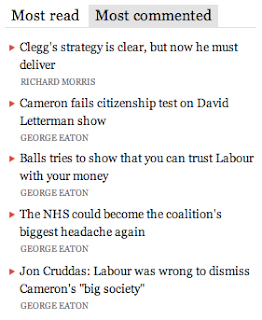