In praise (again) of Helen Duffett....

I pointed out yesterday

"What occurs to me is: in the aftermath (and on going issue) of recent media attention, you'd think for a staged media shot welcoming a new member to Parliament that we'd do a bit of stage management and have some prominent women MPs front and centre".

Whereas we used a series of shots not unlike this..... 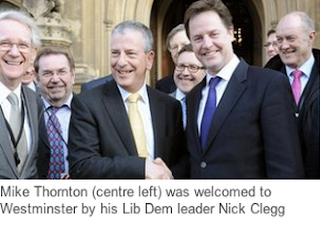 But someone was listening in Great George Street. And in today's LDV review of Mike's introduction to parliament we saw this shot 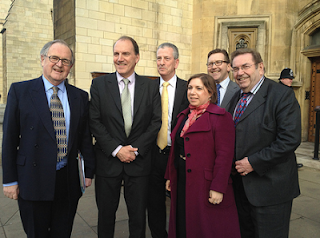 And not just any female Lib Dem MP. A #notosecretcourts rebel to boot!!

And then LDV linked to a video of Mike's introduction in the chamber - where, as Helen points out, Mike was 'flanked by a grinning Annette Brooke and Stephen Lloyd". You'll notice - Annette is...a female Lib Dem MP!

And then just to hammer it home - you can hear Helen shouting "are you getting this, Morris?', can't you - LDV adds..

" Behind Mike, Jeremy Browne and Jo Swinson are clearly delighted as he signs the Test Roll, a parchment book headed by the oath and affirmation which is kept by the Clerk of the House of Commons."

It's great to know Great George Street listens. It's a pity you couldn't vote in the #notosecretcourts debate Helen!