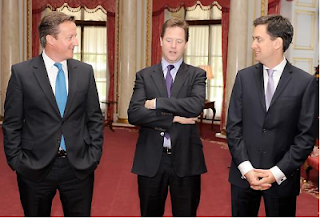 I wrote a piece for the New Statesman yesterday asking what the word 'largest'  means, when Andrew Stunnell says that we will talk to the largest party after the next general election first if a coalition is necessary/a possibility. Do we mean 'most seats' or 'largest share of the vote' as a split of something like 34% Labour, 36% Tories would make Labour largest in seats, but not vote share.

By common consensus, I think its understood that by largest we mean 'seats' as this is the most likely party to form a government. But I'd like to pose a slightly different question - as a party that wishes to replace FPTP with PR, shouldn't we automatically talk to the party who have the largest share of vote before anyone else?

Now of course, for us to have to make this call, requires a fairly unique set of circumstances to come about. But as Labour's poll numbers slip, the economy improves, our support in incumbent seats solidifies and potentially some of that UKIP support goes back to the Tories for a general election - it could all fall into place.

This then begs another question; already the current coalition government is increasingly fractious; some of the key Tory election promises, most obviously a referendum on the EU, are not on our agenda (I'm not sure it shouldn't be, I'm not afraid of a referendum, but that's a whole different story...) - could we actually do a deal with the Tories? As things stand, I can't really imagine it - not least because would the Tory back benches really wear it?