I think we can all agree that implying you can't be a good Minister for Family or Children if you haven't any children yourself is a BAD thing. Which is why Tim Laughton ended up apologising to Sarah Teather the other day for any 'misunderstanding'....


But then the news reached me yesterday that Tony Abbott, the new Australian PM, had decided to take on responsibility for the Women Portfolio himself in the new government.

Now, Tony Abbott is not the best person to take on this role; after all, he was the source of inspiration for 'that speech' from Julia Gillard...

"“I will not be lectured on sexism and misogyny by this man, I will not. Because if he wants to know what misogyny looks like in modern Australia, he doesn't need a motion in the House of Representatives, he needs a mirror.”

And so if there had been a twitter storm about Tony Abbott being a poor choice, you'd nod along. He's an appalling choice.

But it seems to me there was a lot of comment saying that it was wrong that a man had been given the women's portfolio. Here are a few examples...

Now of course there are plenty of other examples of strident and correct criticism of Abbott himself and why he is a poor choice per se to speak on Women's Issues (here's a very good example from the New Statesman). I also found this on line... 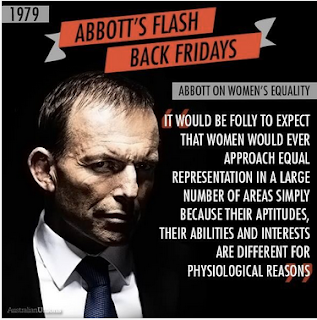 There is also the fact that in a 20 seat cabinet, Abbott has selected just one woman to sit in the cabinet; Now, I know we in the Lib Dems need to do a hell of a lot more to get more women into senior roles in every aspect of the party ASAP. - but compared to Abbott we look almost progressive.

And I am sure that there are numerous women who would be miles better qualified to be the Australian Women's Minister. If I was was PM I'm sure I would choose a woman for the role because they would almost certainly be better qualified.

And suddenly, you're doing a Laughton

I genuinely would appreciate views both for and against this; I think its a tricky area. and I'm quite in favour of say, all women shortlists for PPCs. so if you think I'm completely wrong...do say!