Raising the Threshold on Income Tax; is it worth fighting the Tories over?

Raising the Threshold on Income Tax is a proud Lib Dem achievement, and one we rightly trumpet  - especially given the fact that David Cameron said it wasn't possible.

Now the Tories seems set to try and pinch it as a theme and Danny is going all out to stop them.

I'm just having a ponder about whether that's the right thing to do or not. and wondering if there isn't a better option.

You see, as this rather good article in the New Statesman points out, while raising the income tax threshold is good, it is not a panacea for all evils, nor does it really benefit the poorest in society (who already fall under the threshold) or many part time workers.


"It is regularly, for instance, billed as a tax cut targeted at the lowest earners. And, to state the obvious, someone on say £12k – who would benefit - is clearly on a low wage. Yet it’s important to realise that the proposed hike in the PTA from £10k to £12.5k won’t give anything to the lowest-earning 5 million workers in the UK, all of whom will earn less than the £10k threshold come 2015.
More specifically, it’s said that the specific rationale for a further hike in the PTA is to help those on the minimum wage which has fallen sharply in real terms over recent years. Trouble is, more than 60% of those paid the minimum wage – predominantly women - work part-time. Again, they don’t gain. So rooting the whole argument for going to £12.5k in terms of those toiling on the minimum wage is a bit of a stretch."

Many of the same points were made previously  in this article in the Independent that graphically illustrates who benefits most from raising the income tax threshold. 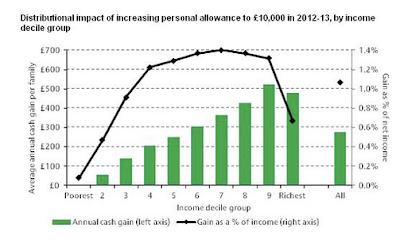 Now, on the other hand, this is a tax cutting measure that is easily understood by the electorate (albeit perhaps misunderstood), is popular with the electorate and most would agree we'd be mad to chuck it away. It also is of course popular especially with the squeezed -the-alarm-clock-middle-income Britain. And lets not forget, even the New Statesman article acknowledged cutting the income tax threshold was a good thing.

But wouldn't it be fairer if for the next step in our bid to help the poorest, rather than further raising the income tax threshold, we raised the National Insurance threshold?

This would benefit more people, and more of the poorest people. Plus if it were timed with a further reduction in the level at which the current income tax threshold is tapered off (currently around £100k) it would be a progressive move. And finally it should be just as easy to communicate and understand as the income tax move.

Wouldn't that be better? and fairer?

Or am I missing a trick, not spotting that in fact this would be evil socialism writ large, and I'm throwing away our most popular policy  - good economics perhaps, but bad politics (a bit like an energy price freeze in reverse).

Do let me know.