So, what should be the Lib Dems 4 Pillar Policy areas for the 2015 manifesto? The Poll results are in...

Many thanks to everyone who took the time to complete my survey. Results are now in - and I think there are a few surprises....

Firstly, the winners in order of popularity (remembering that everyone had 4 votes each) - and there were 4 clear winners:

Many have expressed surprise that housing came top. I'm not. I voted for it myself (and to be honest I think led the jury by declaring I would vote for it) and Tim Farron has written a very strong piece advocating it as an issue recently. It speaks to the Bedroom Tax as an issue, highlighting the dearth of available affordable housing, it's a problem that's only getting worse, its central to the cost of living issue that Labour have so successfully framed the current  economic debate around, and the average age of a first time property buyer in London has now risen to 38.

And other than 'build more' I don't think any of the parties have expressed a policy that hits home with the public in explaining how we will solve this issue. It strikes me there is a huge opportunity here to address a key issue and make it our own.

Anyway, readers of this blog want the manifesto committee to make it their key priority for 2015.

Next, we have 2 pillars that appeared in the key pillars for 2010. Both make sense. Again jobs and sustainability speak to the cost of living crisis, Fair taxes is a Lib Dem vote winner and our progress towards taking everyone on the minimum wage out of income tax altogether is just a good thing to do  - although there is a strong argument that first we should raise the NIC contribution level bar, as this would be more progressive. But details aside, these should form 2 of the pillars.

And fourthly we have energy climate change and the environment. A key current political football, in which I would argue that both Labour (price freeze) and the Tories (cut green taxes) have more distinctive and better understood policies than we do. Not better you'll note - just better understood.

It's also worth noting what didn't do well.

Firstly, I was surprised (and a tad disappointed) that Children didn't do better in the poll- just 14% of folk voted for it (though education did rather better). We seemed to make a clear choice to prioritise children while we were in government (it was a key pillar last time) and we have a strong record (free childcare, pupil premium). Perhaps readers felt we had done enough - I don't.

Also surprising was that another pillar of the last manifesto, political reform didn't make the cut. Perhaps people feel that while we didn't get far this time (AV vote, House of Lords reform), we've missed our chance. I tend to disagree and hope Lords Reform at least features high in our manifesto, and coalition negotiations (if they happen) give us the chance to look again at voting reform. But that doesn't seem to be the majority view.

Also not making the cut, when I thought it might, was anything that might fall under the eye of the Home Office, especially civil liberties.Maybe people feel it wouldn't get people to reappraise the party enough if this 'typically' Lib Dem policy area was too high on the list.

One other surprise for me was that Pension didn't do better  - just 5% of the vote despite our brilliant work on raising the state pension and Steve Webb's pension reforms. Again, do folk feel our work here is done?

Finally, I have been taken to task for missing 2 areas out who readers would like to have voted for; Welfare and benefits reform, and science and research. Apologies and duly noted.

No one took me to task for not giving them an option to tick Europe. which I also thought was interesting.

Anyway, thanks again for taking the time to vote. Here are the full results: 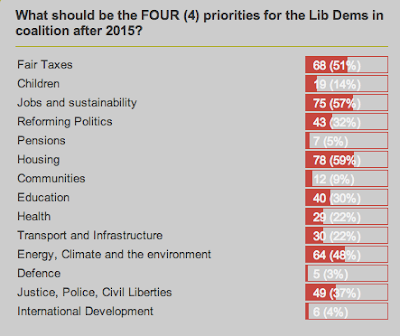 ...to the many folk who RTd the link to the poll. I have tried to send results to as many as I can but so many people were kind enough to send it on I fear I have missed many. But it's all hugely appreciated