Economists get it wrong again. Then explain how it's not their fault. Yawn.

So, in the third quarter, the UK economy grew slightly faster than economists were predicting. They predicted 0.5%, it actually grew at 0.6%. So they were out by 20%.

Cue lots of quotes from City Economists about how this was entirely predicatable and easily explained - even though they neither predicted it, nor apparently were away of the reasons why this would happen at 09.29 this morning. Here's a typical example I've lifted from the Telegraph. 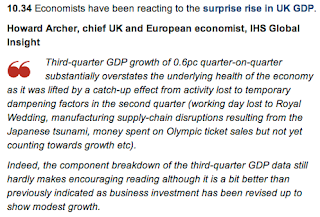 I must get round to writing a longer post at some point about the madness by which the bankers and economists are clearly not in control of events - yet are being put in charge of countries (Italy, Greece) and the Euro Zone as a whole (ECB) - as they are 'the best people to sort this out.

But in the meantime, I'm just going to bang my head on the desk for a while...
Posted by Richard Morris at 10:54