Why did David Miliband resign? I blame this man 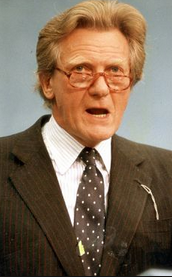 As we wave goodbye to David Miliband - I think this is the best and most balanced 'obit' I have read about his resignation - there is a sense that he could have been Labour leader if only he'd taken either of the two chances he had to stand against Gordon Brown, in 2008 and 2009. The received wisdom is that he didn't have the cojones to do it - and hence he lost the chance. When he did stand for the leadership, there was enough doubt about whether he had that thread of steel you need - which in a finely balanced election was enough to tip the balance against him.

But was it really courage that stopped him standing in 2008 or 9?

Probably partly - but it was also the received wisdom that he who wields the knife, never wears the crown.

Now, whoever concocted that 'rule' a) has never seen 'Game of Thrones and b) hasn't paid enough attention to recent political history.

The reason everyone always cites the rule is that when Heseltine stood against Thatcher, he did enough damage to remove her from the running - but made enough enemies amongst Thatcher loyalists in the process to ensure he didn't win in the next round. This is undoubtably true. But he's a bit of an exception that makes the rule.

The Tories don't have quite the taste for regicide that everyone claim they do - only 3 of the last 7 leaders have been toppled against their will.  But the only other notable Tory politician to stand against the incumbent leader in 'recent' history was  - Thatcher herself, when she defeated Heath in the first ballot. Sir Anthony Meyer was a stalking horse candidate the year before the Heseletine coup but was always only meant to be a repository of protest votes to destabalise Thatcher. And that's pretty much it.

Every other coup against the leader since the 1970s  - across all 3 political parties - has been the result of the men in grey suits or a mass visit from the backbenches, not a single (serious) candidate putting themselves forward to challenge for the top job (I'm talking Ming, Charles, IDS, and to a degree Brown and Blair). All the other leaders resigned of their own accord (Wilson, Callaghan, Foot, Kinnock, Beckett, Major, Hague, Howard, Thorpe, Steele, Ashdown) or died (Smith)

So for any serious politician thinking of toppling the leader, the Heseltine factor looms large - but history suggests the man or woman holding the knife is not necessarily doomed never to be monarch.

They just have to make sure they have the balls.

And, as this Damien Mcbride piece makes very clear - they've done their homework. Otherwise, they're stuffed.

The fact David Miliband either bought the received wisdom, didn't have the thread of steel, hadn't done his homework, or a combination of all 3 - means we shouldn't shed too many tears at his departure now.