Lib Dem activists are prepared for war over the snoopers' charter

So, with the Queens Speech looming over the horizon, and an ominous silence hanging in the air over the Communications Data Bill, I thought I'd get my retaliation in early in case anyone in Great George Street was pondering letting any new proposals slip through on the nod. So I wrote this for the New Statesman.

It seems others thought the same - The Telegraph ran a piece on the dangers of the bill on Friday, Nick de Bois had this in The Spectator on the same day, and today's Times (paywall so I wont link) is fairly clear on where the expert's view lies... 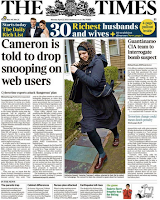 Like some political version of Schrödinger's cat, Lib Dem MPs appear to be trapped in a Westminster box, while activists stand outside, wondering if the fight for civil liberties is alive or dead within. We don’t know – but worryingly, there’s currently a hell of a stench of dead something or other coming from that direction.
Civil liberties are a touchstone issue for party members, lying at the core of why most joined the Lib Dems. And we’ve taken a hell of a battering. For example, this week our MPs voted against a set of proposed amendments in the Defamation Bill which would have made it harder for corporations to silence critics using the threat of libel. This despite the fact that it’s party policy and was proposed in the 2010 manifesto. Apparently, we’re on a promise that it can all get changed back again now it’s returned to the Lords. Although the initial reaction from the party doesn’t exactly fill, you with confidence.

A Liberal Democrat spokesman said the party would be instructing their MPs to vote with the Government. 'Unfortunately we are in a Coalition and this was one of those areas where we could not get our Conservative colleagues to agree with us,' he said

Nor does this excellent analysis of the situation from David Allen Green. And don’t forget all this is on the back of the Justice and Security Bill (secret courts, to you and me) debacle. Seven Lib Dem MPs rebelled over that Bill, fewer than the number who managed to show a bit of backbone during the rebellion over planning regulations this week.
But what’s really keeping activists awake at night, the radioactive isotope that might release the Tory poison and kill the cat, is the new version of the Communications Data bill. You will recall, perhaps, that we were told last year, by a Lib Dem minister, no less - that :

The proposals being considered would simply update the current rules – which allow the police in criminal investigations to find out who was contacted and when – to cover new forms of technology that didn’t even exist when the original laws were made, like Skype

…and it was only when the party went stark raving bonkers that anyone in Westminster woke up and smelled the coffee.
By December, we had moved on considerably, with Nick saying, "we cannot proceed with this bill and we have to go back to the drawng board", which is about as clear as you can get and in marked contrast to his original comments.
But the grass roots party is angry, it’s worried and it’s very distrustful. You didn’t have to go through the last bill with a fine toothcomb to drive a coach and horses through its assault on civil liberties. This time , presumably, rather more care has been taken  - so activists are primed and ready to take whatever is proposed in the next Queen’s Speech apart word by word, line by line.
If the Westminster party thought the grass roots gave them a hard time on civil liberties before, just try and propose some legislation that does anything but roll back the state’s powers in this area. You haven’t seen anything yet

This piece by Mark Pack is also WELL worth a read