This is the Conservative's 'Tuition Fee' Moment 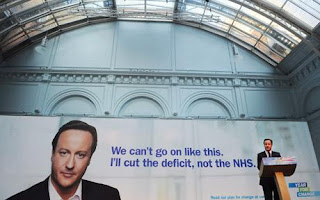 Remember the above poster. Of course you do.

It was the embodiment of the absolute, unshakeable promise that David Cameron made with the British people. We're going to cut the deficit as hard as we can - but the one thing we won't touch is the NHS and in particular its front line services. which means doctors and nurses jobs are safe.

What's the word I'm grasping for to describe this phenomenon. Oh yes, I know. Its a PLEDGE.

So the news that two London hospitals are cutting jobs across the board, including doctors and nurses seems to be an absolute betrayal of what seemed an unshakable promise to the staff of the NHS and the people who use it - i.e. everyone.

(Interest declared - one of these hospitals is my local hospital, and my wife works at the other).

Just as the tuition fees debate was laid firmly (and fairly) at the door of the Lib Dems - our pledge was broken, plus one of 'our' minsters negotiated the deal - so will this betrayal be laid not at the door of the coalition, but at the door of the Conservatives. It is their minister responsible for the reforms, they have ownership of the NHS policy in the minds of the public, plus it is a great big airbrushed photo of their leader who made the promise in the first place.

If they are truly going to cut front line staff, they deserve to get hammered for it. And I won't be willing to take 'collective responsibility' on that one I'm afraid.

Meanwhile, here's a few reminders of the fun everyone had with that poster. 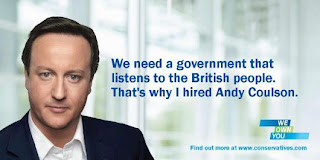 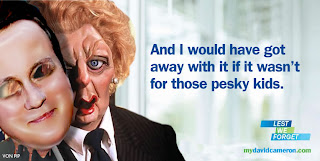