If there's one thing we should be angry about, it's this, isn't it? 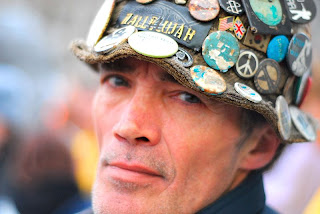 I was really sad to get a tweet yesterday telling me that Brian Haw had lost his high court case and was to be evicted from his protest in Parliament Green. Regardless of whether you agree with him or not, it’s impossible to imagine a more genuine, heartfelt and dedicated protestor, and I would hope under a government in which we play a role, people like Brian Haw would have better protection against this action (which is led by the Mayor and the GLA). If we don’t defend the right to protest – who will?

Many of you reading this will immediately point to the Freedom Bill and what it’s doing to strengthen the right to protest- which is true. But at the same time the ‘Police Reform and Responsibility Act’ currently going through Parliament specifically makes it harder for people to protest in and around Parliament Square. Which is where I think the one place the right to protest should be engraved in tablets of stone.

You also can’t help but feel that part of the reason Brian’s protest is being targeted is that he’s not ‘tidy’; he’s not conventional. He sticks out like a sore thumb amongst the tourists and political glitterati around the square. Good. We’re the party which endorses the right not to conform and to celebrate diversity in the preamble to our constitution. We should celebrate people like Brian and fight for their right to be different. I’m not hearing nearly enough noise on this from the party.

I have also read that if Brian appeals, his hearing will be heard by April 28th at the latest (I would value independent verification of this). What’s happening in Parliament Square on April 28th? Nothing much. What about the day after? Oh yes – it’s the Royal Wedding. Hmm. That timing seems a bit too co-incidental to me – presumably Brian’s protest doesn’t fit the image….

Funnily enough I think Brian’s image – passionate, caring, quirkily eccentric – is one I would be proud for the world to see.

All is not lost. There is the appeal still to be heard and the judiciary has shown themselves on several occasions to be rather more sympathetic to Brian and his natural rights than many MP’s. I hope he wins again. Secondly, he has only been evicted from Parliament Green – the grass where he pitches his tent. The Pavement is owned by Westminster Council and is subject to a different court case. Let’s hope he wins that too.

Meantime, write to Westminster Council (Colin Barrow, the Leader’s details are all here), write to Boris Johnson (mayor@london.gov.uk, but include your postal address as well), tell them how disgraceful you think all of this is. We’re Liberals for goodness sake. If we don’t care enough about this, what’s the point?