David Willetts: an apology. But not to him... 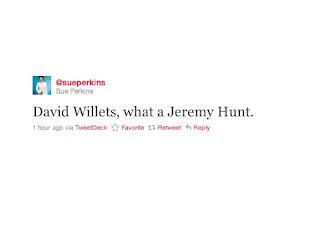 Tory politicians. You can’t take your eyes off them for a minute.

I talked up David Willetts yesterday for his radical ideas about improving social mobility in higher education, by allowing pupils with lower grades from poorer performing schools to usurp pupils with better grades – but loads of advantages to getting them (generally because they are at private schools).

Maybe someone told him that he was being praised in the Lib Dem blogosphere and it spooked him.

Because he’s now gone all True Blue and Old Tory and blamed the travails of the world and in particular the failure in social mobility on…feminism.

So I take it all back. And I'm sorry.

He is, as Sue Perkins just put it, a complete Jeremy Hunt.

Plus my stats have shot up as loyal readers flock to find out why I think he's not talking complete nonsense. Thanks a lot Willetts