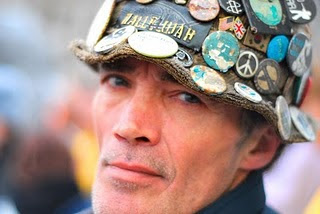 I was very sad hear of the death of Brian Haw yesterday.

I've blogged previously that I think the way in which the establishment treated Brian and the other Parliament Square protestors was very badly thought through, and often quite wrong.

But whatever you thought of Brian's beliefs, you surely cannot deny or do anything but admire the sincerity with which he held them, nor the dedication of Brian to his cause. We should all be grateful that there are people in the world with the passion of Brian Haw.

There is a good obituary piece about Brian in The Telegraph (yes, I'm surprised too) and a life in pictures in The Guardian. I'd urge everyone to have a look at both.

There's a terrific piece now in The Guardian from Tony Benn about why he had so much respect for Brian Haw.
Posted by Richard Morris at 15:23