The seat of a well known South Yorkshire MP is being abolished. He's not called Clegg

Amongst all the heat and remarkaby little light accompanying the publication of the draft proposals from the Bounday Commission, a common theme has been that our glorious leader is in dreadful trouble, as Dorries-like, his seat is being abolished.

In fact, it isn't. It's been renamed but remains largely intact.

Even when the press is adopting a slightly more measured approach, it's reporting is rather misleading. Take this from The Daily Telegraph for example...

Obviously, Nick Clegg's in trouble: Clegg's seat, Sheffield Hallam, has been abolished and replaced with a new seat, Sheffield West and Penistone, which will now include a fairly large chunk of the Penistone and Stocksbridge seat, a fairly safe Labour seat. If voting behaviour was the same in 2015 as in 2010, that could benefit the Lib Dems by shifting the balance in Nick Clegg's seat slightly against the Lib Dems but benefitting the party in neighbouring seats. But given that the voters who opted for Clegg in 2010 seem unlikely to choose to do so in 2015, that will be little comfort for the Lib Dem leader: an unfortunate exit just became a little bit more likely.

Lordy, I thought. How's that going to pan out? How close did Labour run Nick in 2010? Will the new wards make the difference?

Well: here's a screengrab from the 2010 election results for Sheffield Hallam. 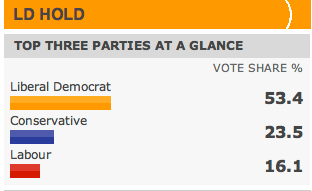 Now I'm not saying Nick and the good Lib Dems of Sheffield Hallam should sit back and relax. But this doesn't sound like disasterous news to me.

So, if it's not Nick, who is the high profile South Yorkshire MP currently having sleepless nights?

It's David Blunkett. As this excellent analysis describes.

( I think I'm meant to be as pleased about Blunkett as Dorries - but sorry, as with Ken Clarke, I can't summon up quite the same sense of schadenfreude...)
Posted by Richard Morris at 08:45