Putting aside the issue of whether the England football team should or shouldn't have worn poppies on their shirts yesterday, it has given rise to that old canard that sport has nothing to do with politics. Indeed to quote FIFA on Friday...

Jim Boyce, a vice-president of Fifa, said: "I'm glad that a compromise has been reached [and] I'm delighted that Fifa has now said to the FA that players can have black armbands on Saturday with the poppy on the black armbands. Let me also say that I can understand why Fifa do have this rule. Football and politics should not mix and, if you do give in to someone, it can create problems further down the line".

Now, I've blogged on how sports and politics are intertwined before. But as FIFA appear to have forgotten, here's a picture of how they apprently are quite happy to have them mix. 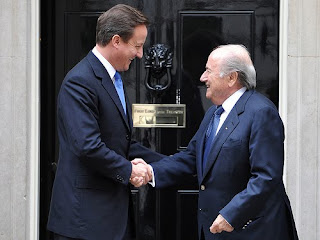 (Picture from the Sultan of Snow Blog, via Flikr)

So, lets not have any more of that old nonsense.
Posted by Richard Morris at 08:45