The BBC have written to me... 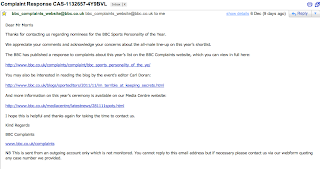 This is the BBC's response to my complaint about the Sports Personality of the Year all male shortlist. Click on the image to enlarge.

I suppose I'm quite impressed they replied so promptly. But I sense the volume of complaints led them to develop a set response....

Anyway, when you click on the first link, here's what BARBARA SLATER (yes, it's a woman in charge of this debacle) has to say. The 'why Nuts and not a woman's magazine' section is particularly weak...

But make your own minds up.

We received complaints about the lack of women nominated for the BBC Sports Personality of the Year 2011.

We recognise that the all-male line-up has created much debate amongst viewers of the programme, sports-lovers in general and those that champion the cause of Women’s sport in this country. We have had many different points made in the reaction we receive which informs our editorial discussions and we do value it. We have reported all this feedback widely across the BBC and in order to ensure we use the licence fee as efficiently as possible we are sending this response to the issues from our Director of Sport, Barbara Slater to everyone who has contacted us which addresses as many of the detailed points raised by everyone as we are able to:

"The shortlist comprises some of the finest sports stars on the planet. Everyone is rightly proud of their achievements over the last year, the role they play in inspiring younger generations and the credit they deliver back for the UK. I share the disappointment that the independently determined shortlist does not include any British Sportswomen. There were some worthy female candidates and I should recap how the selection process works.

"The shortlist of the ten British sports stars is determined by the combined votes of a panel of industry experts based on their assessment of relative sporting achievements during the year. The panel consists of the sport editors of the national newspapers, selected regionals and magazines. These are chosen because of their expertise in the area, their coverage of a wide range of sports throughout the year and the extent of their readership. In total, we received 27 responses from the 35 invitations that were issued this year. The panel included publications such as the Sunday Times, the Daily Mail, the Irish News, the Mirror, the Daily Telegraph, Sport Magazine and the Herald. It is worth noting that most of the publications did include at least one sportswoman in their shortlist.

"The inclusion of publications such as Nuts and Zoo in the shortlisting panel is for a variety of reasons. These magazines have a dedicated sports section which every week covers a range of sports including Women's sport and minority sports. They also have a readership profile which reaches younger audiences and helps contribute to a balanced panel which is representative of all the BBC's audiences. There are very few other widely-read publications that cover such a breadth of sporting news, features and reports on a regular basis. We do not include specialist sporting publications given their potential inherent bias to one particular sport nor do we canvas the views of non-sporting publications.

"The current system was introduced in 2006 and at least two women have always previously been shortlisted for the main award. Having considered a wide range of alternative mechanisms, we remain convinced that the current system is fair, independent and robust. Previous top 10 candidates included in 2010 Jessica Ennis (3rd) and Amy Williams whilst 2009 saw Jessica Ennis (3rd) and Beth Tweddle. In 2008 Rebecca Adlington (3rd), Nicole Cooke, Christine Ohuruogu and Rebecca Romero all made the Top 10 as did Paula Radcliffe and Christine Ohuruogu in 2007. In 2006 Nicole Cooke, Beth Tweddle and Zara Phillips were nominated with Zara winning the award. This is therefore the first time there has been no female representation since the current system was put in place five years ago. The ultimate winner of the award is determined solely by a public telephone vote during the show itself.

"We stand by the current voting process but have committed to take on board what has happened this year and we will review the shortlisting process for next year's show. It is too early to say what, if any changes will be made to the process but please rest assured that we will seek the opinions of people both within and outside of the BBC before deciding on the appropriate methodology for 2012.

"The current focus on the shortlist for the Sports Personality of the Year Award has shone a bright light on the wider issues surrounding the media coverage and profile of Women's sport in the UK. As I'm sure you are aware, the BBC is committed to covering a broad range of sports and events and this includes a significant commitment to Women's sport. The BBC is proud to have followed the achievements of many successful sportswomen through our coverage of events such as the Olympics, the Commonwealth Games, Wimbledon and the Women's Football World Cup.

"I trust that I have addressed your questions satisfactorily and made clear the BBC's commitment to a fair selection process. This year's shortlist for the main award represents six very different sports and has candidates from England, Scotland, Wales and Northern Ireland. It is disappointing that the independent process did not result in the shortlisting of a female candidate; but we believe it does not detract from the incredible array of British talent that will compete for the 58th Sports Personality of the Year Award.“

Barbara Slater, Director of Sport
Posted by Richard Morris at 16:27