The Tory Choice in Secondary Education: Take it or Leave it. 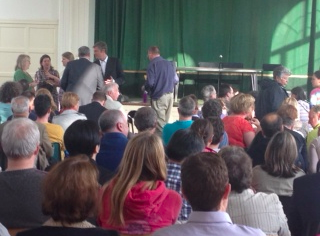 When a Tory MP, at a public meeting, answers the question 'are we being railroaded into choosing a free school?' by saying

'well, it is government policy to fund free schools'

...then you know the whole 'parental choice' pack of cards has come crumbling down. But that's what happened at a Public Meeting I attended last night.


Organised and hosted by Zac Goldsmith (and attended by one Tory and two Lib Dem councillors as well as the new Education, Children's and Cultural Services Director), the meeting in North Kingston was organised to discuss the urgent need for 240 new school places in Kingston. An agreement in principle has been reached to build a new school under the previous government's BSF programme, but with the demise of this scheme fresh funding is needed.


Centrally this could come from the Basic Needs programme - but we were told this tended to be given to primary schools and for refurbishment, rather than secondary or new build.


So that left the only option (other than cutting £25million from other services or raising Council tax by 5%) - a Free School.


Now I'm not going to rehash all the arguments here about whether Free Schools are in themselves a good or bad thing (there's a comments section - knock yourselves out).


But as one parent put it tonight - "I'm not political, I have no axe to grind abourt Free Schools one way or another, but where's the choice?'. He had the issue in a nutshell.


Indeed, such is the desperation for funds, one Lib Dem councillor said - 'you're right - we're being given no option at all. But I have to get this school built - even if it ends up getting called the Michael Gove Free School'. She was joking - but clearly very angry.


So next time I hear Michael Gove (or Toby Young) say that the establishment of Free Schools is all about parental choice, I will put my foot through the TV.


Its a Free School, hurt the needy, raise taxes (oh, very Conservative) - or nothing.