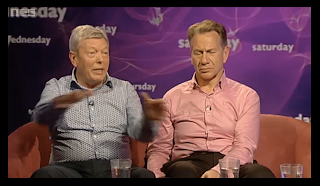 Alan Johnson was on BBC This Week last night and apparently, he still want the Snoopers Charter brought in.

The key passage can be seen here (the first 60 secs or so is the key bit) but as it won't be up for too long, I've also transcribed the key passage below. Thanks to @Glynley for finding the right clip.

"The government are, we hear today, dropping the Communications Date bill...this is not the time to be complacent".

When then challenged by Andrew Neil if he thought the government should have continued bringing in a Snoopers Charter, Johnson goes on...

"I think they should. Look, it was...I saw it, and so does the Intelligence and Security Committee, as a major major problem...we always had the ability with telephone calls and letters - because the state owned it - now with the explosion in new methods of communication, they don't know, to the extent they should, who is communicating with who".

It's now very clear, with the Tories having brought this forward this time, and Labour trying to do the same in the last government , that it is only the Lib Dems in Westminster who are stopping this legislation being brought forward and defending civil liberties in this area